To celebrate the release of Wreck-It Ralph on Feb 8, Disney have transformed a street in London into a computer game. 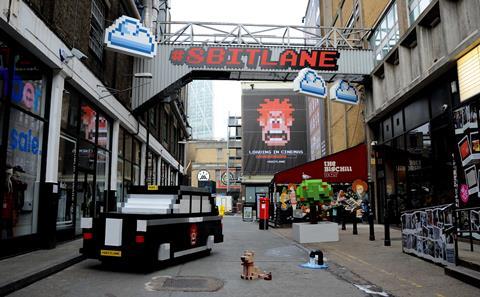 If, like me, you’re mourning the decline of arcades in the UK, then Disney’s upcoming film Wreck-It Ralph is perfect for your nostalgic needs.

Disney utilised film production sculptor Aden Hynes to create bespoke pieces of 8 bit art for the installation, including a London taxi, a leaking water pipe and clouds, all for your viewing pleasure completely free of charge.

“My whole life has become somewhat pixelated over the last month, I played 8 bit games as a teenager, so it was great to realise that vision in three dimensions,” commented Hynes.

On top of this, 9 Bit Lane features the world’s first blipp-able building using Blippar’s visual discovery app, allowing visitors to ‘blipp’ The Nicelanders (characters in the Fix-It Felix game featured in the film) house and see it in 3D, then be able to play Fix-It Felix.

However, if you’re of a more traditional persuasion such as myself, 8 Bit Lane also features the Fix-It Felix game in arcade form.

Disney will release Wreck-It Ralph in the UK on Feb 8.