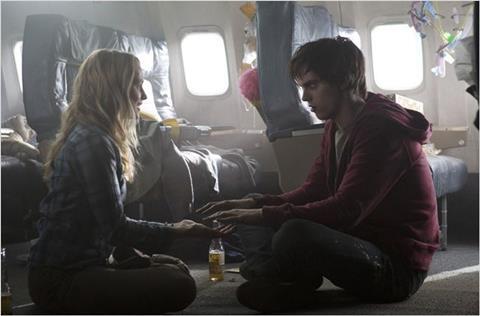 Giving a rom-com twist to the always reliable zombie genre, Warm Bodies turns a cute premise into a mildly affecting story of forbidden teen love. Part of a mini-trend of young adult novel adaptations mixing horror with romance, this lightweight offering from Twilight producer Summit Entertainment  might be able to attract a part of the female led audience that just bade farewell to the Twilight franchise.

The second and third acts lack the charm of the first and the film eventually turns into a pretty standard zombie action outing.

Being first in the trend - and being based on a still popular 2011 novel - will certainly help when Summit gives the film its wide US release on Feb 1. The casting of rising British talent Nicholas Hoult and Australian up-and-comer Teresa Palmer should boost the takes in those countries and perhaps in other international markets as well.

In a familiar post-zombie apocalypse world where what’s left of humanity lives in fortified urban enclaves, R (Hoult, from X-Men: First Class and British TV’s Skins) is a zombie who vaguely remembers and pines for the old human world. When his zombie band encounters a group of humans, R is immediately smitten by Julie (Palmer, from last year’s Australian mystery Wish You Were Here) and, instead of eating her brains, he takes her to his hideout in an abandoned airliner.

The relationship deepens over the film’s wistfully funny first act and when Julie returns to the walled-off city where her ruthless zombie hunting father (played by John Malkovich) leads a well-armed security force R follows. The romance, it turns out, has sparked something in R and the other zombies, who end up joining forces with Julie and the other humans to battle against the Boneys, latter stage zombies that are beyond saving.

The second and third acts lack the charm of the first and the film eventually turns into a pretty standard zombie action outing with less than impressive special effects.