Fast & Furious 5 remained in pole position for the second consecutive week, becoming the franchise’s biggest overseas grosser in the process. 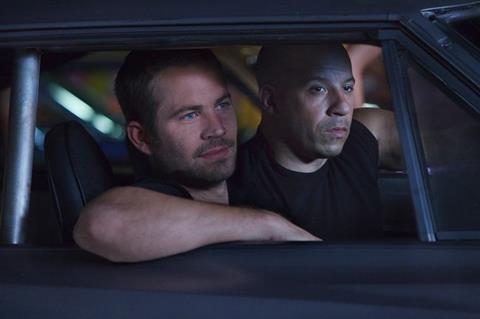 Universal’s Fast & Furious 5 remained in total control of the international box office this week after a further $58.3m was added to its already impressive bounty to become the series’ highest earner in the process. It has now made $272.4m internationally, a total that rises to $441.9m worldwide, and is well on track to dislodge Rio as 2011’s top international earner in the coming weeks.

However, a day-and-date rollout for the latest episode in Disney goldmine Pirates Of The Caribbean: On Stranger Tides, is likely to see Fast & Furious 5’s reign at the top end next week.

A fall of just 34% in its fourth week was enough to see Paramount’s Thor hold onto second spot as it grossed $29.7m from its 57 territories to cross the $200m mark. The action-adventure could still challenge Iron Man 2’s final $309.6m tally as Marvel Studios’ highest earner but first in its sights will be Iron Man’s $266.8m haul. It might have to wait until its July opening in Japan to land the hammer blow.

Rio’s reign in the top three was finally ended in its sixth week as a raft of new openings allowed Priest to ascend from seventh to third. Sony’s 3D sci-fi managed to topple the seemingly indomitable Fast & Furious 5 from the top spot in Russia on its way to $17.5m, a 212% week-on-week improvement.

However, 20th Century Fox’s animation can console itself with the fact that it managed to become the first film in 2011 to cross the $300m mark.

This week’s highest new entry belonged to Imagina’s Midnight In Paris. Strong openings in each of its three territories - the pick of the bunch being a second place $3.8m debut in France - meant that Woody Allen’s Cannes opener arrived on the international scene in sixth after taking $5.7m.

China Film’s Til Death Do Us Part followed closely behind in seventh after an impressive $5.1m debut in China. Gu Changwei’s drama about a AIDs-inflicted couple in a rural Chinese village racked up a sterling $21,194 screen average in the process.

Black Swan pirouetted back into the top ten in its seventeenth week as a $3.4m haul - predominantly down to a chart-topping $3.3m debut in Japan - was enough for it to chart tenth. A strong holdover next week should see 20th Century Fox’s psychological drama cross the $200m mark on the international stage.

There were two other new entries in this week’s top twenty: Star Cinema’s In The Name Of Love recorded the week’s highest screen average of $22,040 on its way to $1.9m to chart 16th; while Studio Canal’s Attack The Block landed in 19th after its third place $1.8m debut in the UK.