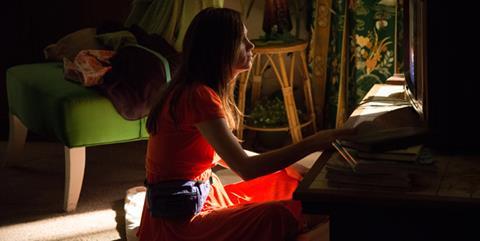 Finding that right balance between amusement and addressing the issues at hand, Kristen Wiig’s virtuoso portrayal of a lottery winner suffering from Borderline Personality Disorder who uses her winnings to host her own TV show about herself in Welcome to Me is as refreshing as it is amusing.

This feature is all about Kristen Wiig’s energetic and courageous delivery, who at one point walks through a casino with no clothes on that to some is perhaps a step too far, but to others emblematic of her carefully thought out performance that very few could pull off with such dignity and eccentricity.

Premiering at the Toronto International Film Festival as a Special Presentation, it provides the film with the necessary exposure to generate potentially strong word-of-mouth, which along with the appropriate and effective marketing strategy ahead of its North American release could result in a healthy theatrical run, but the film’s bizarre plot may put off some viewers. Nevertheless, if handled smartly - and with Will Ferrell as one of the film’s producers giving it that extra push - this could be a sleeper-hit in the making.

Kirsten Wiig plays Alice Klieg who initially is diagnosed with manic depression in her teens, but later is told she suffers from Borderline Personality Disorder by her doctor (Tim Robbins). Alice has a strict routine, which includes watching Oprah on VHS at home, reading off pieces of paper, and playing the lottery that one day she ends up winning and becomes a multi-millionaire overnight having won $86 million.

After being cut off from reading a statement on live TV following her lottery win, she approaches a different media outlet where she proposes she hosts her own show where for two hours it will be focused on her life, which includes her high-protein diet, and among other things, her personal grudges. Once she gets her chequebook out and gives them a $15 million cheque, the struggling production company head (James Marsden) agrees despite some justifiable reservations from the team.

After some initial bumps, she decides to give the company more money when she realises that the show isn’t as polished as Oprah. Again, the man in charge agrees while many of the team remain dubious, but as the show becomes increasingly more eccentric and wild, the ratings go up, which at one point is ahead of The Fresh Prince of Bell-Air. Problems do arise, however, when a number of lawsuits come pilling in after she slanders individuals on air, while the relationship with her best friend Gina (Linda Cardellini) becomes increasingly strained when Alice focuses more on herself than those around her.

Director Shira Piven along with the film’s scriptwriter Eliot Laurence handle the film’s theme effectively and smartly utilising the film’s dark humour to help address and increase awareness of Borderline Personality Disorder without ever making it inappropriate or insensitive. However, this feature is all about Kristen Wiig’s energetic and courageous delivery, who at one point walks through a casino with no clothes on that to some is perhaps a step too far, but to others emblematic of her carefully thought out performance that very few could pull off with such dignity and eccentricity.

Although the supporting roles are very much overshadowed by Wiig’s towering performance, Joan Cusack’s limited but entertaining role as the show’s director stands out, and Wes Bentley who plays Alice’s romantic interest also leaves his mark playing a man who’s also grappling with issues. Tim Robbins is equally effective as Alice’s shrink sticking with his usual understated persona.

Technically, the film is solid with a particular nod to the production designer Clayton Hartley who has put together a TV set to match the film’s wacky premise.

Much like Piven’s previous film, the little seen Fully Loaded, (2011) the feature benefits from a short running time at under 90 minutes preventing the film from meandering too much and therefore for the most part remains focused. However, at times there are some signs where it begins to struggle to find new ideas to keep the narrative flowing, but Wiig on top form, ultimately seals the deal.