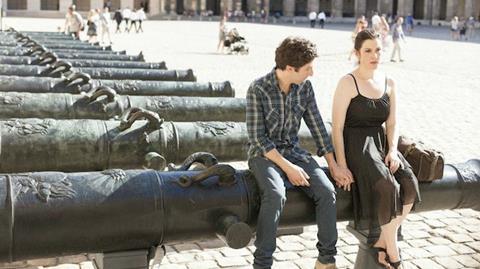 Autobiographical romantic follies are reduced to glib, sitcom-style farce in We’ll Never Have Paris, a charmless venture from husband and wife Simon Helberg and Jocelyn Towne. Helberg’s Big Bang Theory following should be sufficient to secure some theatrical interest but the unappealing characters and contrived situations will make it an uphill struggle beyond that fan base. The film receives it UK premiere as Edinburgh’s closing night gala after a world premiere at SXSW.

Helberg’s screenplay has a sprinkling of Woody Allen-style one-liners and some visual gags but just not enough to overcome audience resistance to the lead character.

There are likable elements in We’ll Never Have Paris, including brief appearances from supporting players Alfred Molina and Dana Ivey, a catchy soundtrack of French pop and some location filming in Paris. What isn’t likable at all is the central character of Quinn Berman (Helberg), a neurotic,blustering, hypochondriacal emotionally stunted florist who seems to have strayed from an early and infinitely superior Woody Allen film.

After a 10 year relationship with the inexplicably loyal Devon (Melanie Lynskey), Quinn is on the brink of proposing marriage when attractive but gormless colleague Kelsey (Maggie Grace) declares that she might just be in love with him. Flattered by the attention of a tall blonde who once modelled, he breaks from Devon and quickly discovers that he has made a terrible mistake. By then, Devon has moved to France and so Quinn heads to Paris (cue references to Truffaut films and jokes about snails) where he tries to win her back.

Early on, We’ll Never Have Paris makes the bold claim of being ” based on a true story. Unfortunately”. We know that Helberg and Towne married in 2007, but in the film nothing about the ups and down of the relationship ring true. Emotional commitment is casually made and quickly cast aside,  people who have apparently know each other for years start to act illogically and it all feels incredibly unlikely.

Romantic comedies traditionally rely on audiences rooting for the couple to conquer all obstacles and find their happy ending. Every time Devon breaks from Quinn, it feels like a lucky escape. Quinn’s character has such a monstrous self-regard and passive/aggressive neediness that you are rooting for her to see sense, run for the hills and enroll in a Witness Protection Scheme.

Melanie Lynskey is smart and engaging as Devon but her role is scarcely developed beyond the object of Quinn’s inconstant desire. What she sees in him is hard to fathom. The other female characters who fall at Devon’s feet are equally one-dimensional and stretch credibility.

Helberg’s screenplay has a sprinkling of Woody Allen-style one-liners and some visual gags but just not enough to overcome audience resistance to the lead character. As the on again/off again nature of the romance grows repetitive you start to wonder if they should have called it ‘We’ll Never Have Closure’.