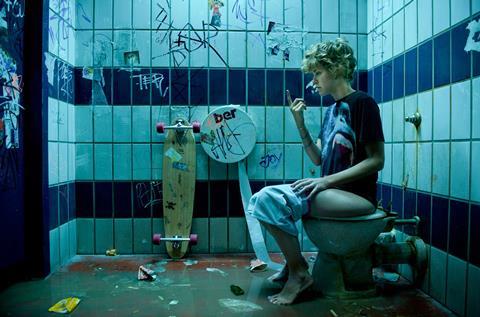 The revelation of Wetlands is the dynamic and charming performance from Swiss actress Carla Juri whose verve and intelligence shine through as she dominates a film that is littered with fine performances.

The film, which screened at the Locarno Film Festival and is set to open in Germany, will no doubt divide audiences and critics, but it is a bold, colourful and watchable film, directed with style and an engaging sense of the oddball by David Wnendt, with its sexuality and edginess likely a plus when it comes to sales to more savvy and smart indie distributors.

Echoes of Trainspotting (sans drugs and shot more glossily) are there right from the start as she makes her way into a disgusting public toilet, tiptoes barefoot through the dank water on the floor and tends to her hemorrhoids, before explaining how she likes to wipe her naked behind on a dirty toilet seat. The tone – well at least a desire to shock – is set, as her monologue explains her family background and how her mother’s hygiene obsession set her off in the opposite direction.

Soon she is naked in the bath experimenting with vegetables as sex toys (ginger gets a no, but carrots a big yes); explaining the background as to why she shaves her body hair so vigorously; musing over the sex life of her best friend Corinna (Marien Kruse), and also hoping that her separated parents (Meret Becker and Axel Milberg) might one day get back together.

The revelation of Wetlands is the dynamic and charming performance from Swiss actress Carla Juri (who looks like a young Meg Ryan circa Top Gun) whose verve and intelligence shine through as she dominates a film that is littered with fine performances (Meret Becker as her mother is especially memorable).  Helen is a bold, unconventional and complex character and it is to Juri’s credit that she manages to make her oddly tender and driven by her own sense of love and hope.

Screenplay: Claus Falkenberg, David Wnendt, based on the novel by Charlotte Roche