What the BAFTA wins mean for the Oscars

Oscar voters across the Atlantic will have felt some ripples from BAFTA’s Sunday night awards show as they weigh up their own choices. 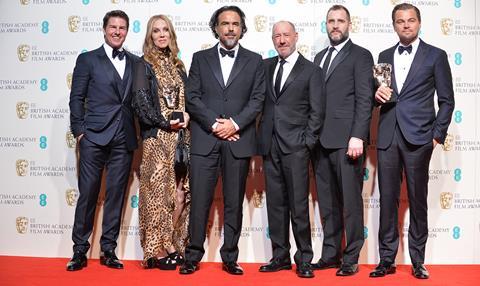 Final ballots for the 88th annual Academy Awards close on February 23, five days before the ceremony will wrap up an intriguing season and declare winners in categories that in several cases remain too close to call.

This means there will be a little over a week for the BAFTA winners to rattle about inside the heads of Oscar voters.

In the last five years BATFA and Oscar winners in the film, lead actor, lead actress and director categories have matched on average just under three times each year.

But this hardly comprehensive statistic should not overstate the influence of the British show. By this late stage of the season Oscar voters will be aware of many winners from many awards bodies and critics groups.

The best picture Oscar race boils down to a three-way contest between The Revenant, The Big Short and Spotlight, and in this regard The Revenant’s BAFTA win could serve as an influential eleventh-hour reminder of the film’s appeal.

Some awards pundits in the US believe Spotlight retains a marginal lead, while The Big Short recently picked up the Producers Guild Of America prize, a strong bellwether that has foreshadowed the Oscar winner in the last eight years.

BATFA best actor winner Leonardo DiCaprio hardly needs another awards to cement his status as Oscar favourite and this category has produced a match among BATFA and Oscar voters in four of the last five years.

DiCaprio is a shoo-in to win on February 28. Many of the Oscar voters hail from the acting branch and admire his performance. The accompanying narrative of physical hardship on location has been oft-repeated on the promotional circuit and despite its heavy-handedness it remains an influential one.

Similarly BATFA’s best cinematography winner Emmanuel Lubezki needs no extra help en route to what looks likely to be his third Oscar in a row in a weekend that also saw the Mexican claim the American Society Of Cinematographers’ top award.

There is the feeling among Oscar voters that the latter two films deserve something on their big night out and the sentiment might lead to an upset in the directing category.

Brie Larson’s best actress win in London for Room confirms her as the out-and-out frontrunner for the Academy Award and again, BAFTA’s vote is unlikely to affect the outcome of the Oscar.

The supporting acting contest remains a close one. BAFTA winner Mark Rylance is highly regarded but finds himself in a wide-open category that includes Sylvester Stallone for Creed, Tom Hardy for The Revenant, Mark Ruffalo for Spotlight and Christian Bale for The Big Short.

Kate Winslet is by no means likely to repeat Sunday’s triumph on February 28 for Steve Jobs. Rooney Mara for Carol and Jennifer Jason Leigh for The Hateful Eight are the frontrunners.

The adapted screenplay win for The Big Short and Spotlight’s triumph in the original screenplay category echoes the Writers Guild Of America’s choices at the weekend and reflect the season’s two frontrunners. Oscar is odds-on to follow suit in both categories.