When The Lights Went Out 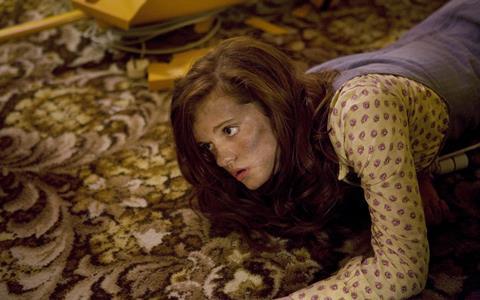 This impressively staged tale of hauntings and exorcism in Yorkshire during the 1970s has enough spooks, shocks and scary moments to make audiences jump, and fits nicely in the current demand for ghostly tales as evidenced by the success of The Devil Inside.

Where it does succeed in is the recreation of Yorkshire in the 1970s and with the straight-faced sense of humour in the face of horrible happenings.

Terrific production design, solid performances and a nice sense of humour combine with the terrifying tale – naturally ‘based on a true story’ – which oddly works well set against the clichéd Yorkshire ‘take no nonsense’ attitude. When The Lights Went Out could be an easy sale given the success of horror both theatrically and on home entertainment. The film had its premiere in the Spectrum section of the Rotterdam Film Festival.

What gives the film its edge is the period setting of Yorkshire in 1974. The exorcism-horror movie moments might well be by-the-numbers and largely expected, but the backdrop of a haunting in an ordinary semi-detached house on a bland housing estate is engaging and mix that with the fashion and design highlights (or lowlights) of the 1970s and you have a refreshing spin on a well-trod genre.

As might be expected, an ominous music cue opens the film as the Maynard family move into their new home. It might look nice and new, but it is also pointed out that the Castlefield Woods behind the house are “right mysterious”.

Young Sally Maynard (a terrific performance by Tasha Connor) settles into her new room, but at night the lamp swings around, things move about the room, and – most amusingly as she points out to her parents the next morning – her toy “Buckaroo went off…by itself!”

Her mother and father Jenny and Len (Kate Ashfield and Steven Waddington) soon see things for themselves as things fly about the house, there are strange noises and other spooky happenings. There is a little research done into spirits at the local library (ah, pre-Google – now the easy movie standby when exposition is needed), but in typical stoical Yorkshire fashion the family stick it out.

In an amusing moment over breakfast they mull over whether the spirit might have gone already…only for the camera to pan over to their coffee granule holders which pops open and pours coffee over the work surfaces.

But after Jenny is badly stung by a swarm of wasps that are lurking around one of the rooms and Sally is spooked while on a trip to a local monastery Len decides action has to be taken. He eventually manages to persuade priest Father Clifford (Gary Lewis) – through a little blackmail when he is threatened with revelations about his affair with his housekeeper – to conduct an exorcism, which seems to sort out the problem.

Before the end credits there is an on-screen statement that the “Maynard haunting is considered the most violent in European history”. This may well be the case, but When The Lights Went Out is not an overly violent film, utilising fairly standard exorcism/haunting devices and lacking an abundance of blood and gore that some horror fans prefer. Where it does succeed in is the recreation of Yorkshire in the 1970s (take a bow production designer Jane Levick) and with the straight-faced sense of humour in the face of horrible happenings.