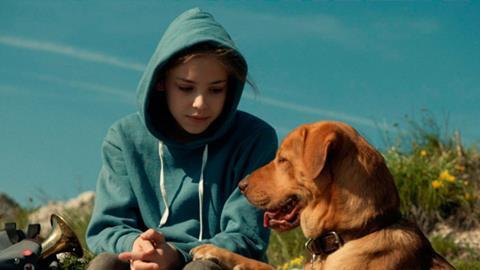 No one will ever accuse Kornel Mundurczo of looking for easy options. Each and every one of the films he has made have challenged his audience and his latest is no different. A cautionary allegory warning against the racial hatred and intolerance raising its ugly head all over the world, it starts innocently enough as a tale about a girl and her dog, but ends in a threatening tone, very much akin to the conclusion of Alfred Hitchcock’s The Birds. And if the rest of the world can close its eyes for a while, pretending it doesn’t concern them, Hungarians - who will immediately find similarities with their daily news - are invited to pay attention.

The dogs may look unruly and wild - Mundruczo never attempts to give them any kind of human characteristics - but suggests the time is near when they will wreck their vengeance on anyone who considers himself their superior. And the dogs, of course, are just a metaphor.

Thirteen year-old Lili (Zsofia Psotta) is left in the care of her estranged father, when her mother goes to Australia for three months. Daddy (Sandor Zsoter), a former academic now working in a slaughterhouse, is not at all happy about it and when he realises Lili has a dog, Hagen (played by two separate four legged performers, Luke and Body) who is coming along to stay with her in his flat and share her bed, he flips. After a stormy night and several unpleasant encounters with a hateful neighbor, Hagen is left out on the highway, against Lili’s protests, to fend for himself.

At this point, the plot splits in two. Lili runs away from her father and in between rehearsals of the school orchestra, where she plays the trumpet, she rides her bike all over town to look for her lost dog. Meanwhile Hagen, now on his own, escapes the city dogcatchers but falls into the hands of an evil gambler, who shoots him up with drugs and trains him for dog fights.

Though he defeats a full-sized Rottweiler in the fight, once Hagen gazes upon his dying opponent, something happens. He runs away again but this time he is caught and sent to the dog pound. But there, making use of all the fighting skills, he overcomes the guards and releases an entire kennel of dogs onto the streets, launching a massive rebellion against all the men (White Gods) who were responsible for their fate.

Just like Hitchcock before him, Mundruczo’s conclusion suggests that the complacent, self-satisfied, corrupt ‘white species’ running the world and taking for granted that all other species are inferior and exist only for their benefit, are about to be taught a bitter lesson. But unlike Hitch, Mundruczo’s ‘white gods’ are not just oblivious of the impending danger in store for them, they actually trigger it by their own actions and conduct.

His opening scene takes place in the city abattoir, most of his human characters are distinctly unpleasant, not to say hateful, and even when they pretend to be tolerant, they are as bad as the rest. In contrast, the dogs may look unruly and wild - Mundruczo never attempts to give them any kind of human characteristics - but suggests the time is near when they will wreck their vengeance on anyone who considers himself their superior. And the dogs, of course, are just a metaphor.

Superbly trained by Teresa Ann Miller, Luke and Body who play Hagen, hold themselves proud against anyone in the two legged cast, Psotta’s innocent face and luminous eyes are an asset not to be denied and the dog hordes invading the Budapest streets look like a new version of armies sweeping over Europe. These dogs (280 exactly) were trained by a Hungarian trainer Árpád Halász. Animal lovers will look away in some of the scenes here (Hagen’s training sessions are a tough watch) but ultimately, they should be pleased….because ultimately dogs have the upper hand.