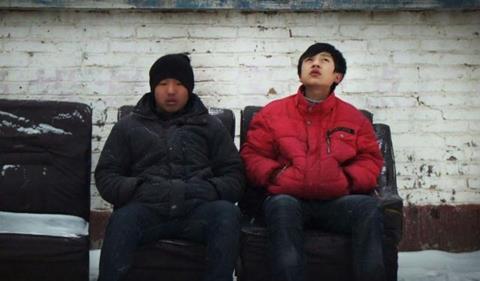 More like an experiment than a feature film, Li Hongqi’s independent production is a highly mannered third film that couldn’t have been more static had it used still photography throughout. The fixed camera switches form one set up to the next but never moves, the wide screen image is carefully framed but frequently left empty; the characters, when they come in, are carefully distributed around the vacant space but barely identified, if at all; dialogues often consist of either idle patter or ceremonious statements, and the entire picture looks like a series of “tableaux vivants” depicting a small Chinese town on the last day of the winter vacation.

Some critics will enthusiastically praise the stylized precision, timing and tongue-in-cheek humour; others will find it terribly boring and stultifying.

Some critics will enthusiastically praise the stylized precision, timing and tongue-in-cheek humour; others will find it terribly boring and stultifying. Festivals are sure to be interested in its curiosity value and some awards may be waiting around the corner. Yet, specialized museum exhibition would be much more in order here than cinema distribution.

Shot in a Northern Chinese province, using its glum architecture and choice of colours as a distinct comment on the look of the city and the spirit of its society, the film focuses on a group of four or five adolescents, bored out of their minds with all the free time on their hands, also on some of their friends and relatives. There is no story or plot to speak of, rather separate incidents and conversations in which every line of dialogue is usually separated from the next one by a long silence. The angle is mostly medium or long shot, but some of the rare close-ups are surprisingly effective, particularly those of a five or six-year-old boy, who steals the show every time he is on camera. Left with his grandfather, he sits on the sofa, tells the old man he doesn’t want to be his grandson anymore. Later he reveals to a little girl, even younger than himself, that his dream is to become an orphan and the expression on his face, whether he talks or just looks, is worth a thousand speeches.

Similar moments are delivered by a teenager and his girlfriend who discuss the pros and cons of having an affair and its eventual effect on their studies, by a bully who is slapped by his victim’s father, and by a teacher who enters the wrong classroom on the first day of school after the vacation and launches into a fiery speech to the wrong students on the pointless future awaiting them all.

As a guarded satirical portrait of provincial Chinese life, it requires more than a little patience to accept the constant, intentional repetitions of lines and gestures, the over-meticulous staging of each scene or the stiff intentional pretentiousness of the dialogue. The total absence of a musical score and the insistence on sound effects only, disrupted by a wall of deafening music exploding over the end credits, an act of rebellion against the dutifully ordained, low-key voice tonality and uneventful proceedings up to that point, is also a reminder that the author is supposed to be a rock musician as well. The entire exercise depends on accurate timing and Li Hongqi apparently has a lot of fun playing around with it. Whether the audience will share the fun is an entirely different matter.