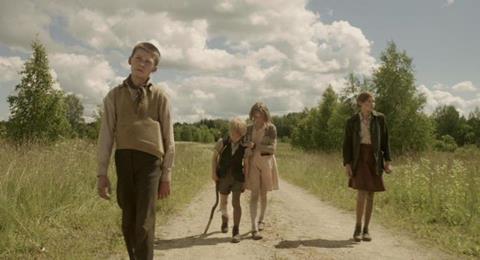 An almost forgotten footnote in the immediate post-war history of German is illuminated through a glass darkly in first-time feature director Rick Ostermann’s tough, dour Wolf Children (Wolfskinder), which is inspired by the true story of the packs of German orphans who roamed through Soviet-occupied East Prussia in 1946/7, attempting to reach sympathetic host families in Lithuania.

Ostermann and his cinematographer Striker deliberately remove all geographical markers from the journey to evoke these orphans’ own sense of disorientation as they are forced to harden up and feed themselves on berries, frogs and whatever else they can find.

Making demands on the audience right from the opening scenes, in which a slip of a lad steals a horse, shoots it and carves out a hunk of meat to eat, this is both a harsh survival story and a dark nature fable in which a group of hardened Hansels and Gretels attempted to outfox the witch of adult hostility and indifference. The cast of youngsters, most of them first-timers, deserve a medal for bravery, but there’s something in the performances that jars – at times it’s as if they’re in a kid-oriented adventure film, a kind of ‘Famous Five go Feral’, rather than in one of the darkest and bleakest times and places in modern European history.

This, and the fact that there’s little in the way of hope offered by a film where, much of the time, the kids are not alright, is likely to confine Wolf Children to festivals outside of Germany, plus perhaps the Baltic states and parts of Scandinavia. Another stumbling block to wider distribution will be the thematic overlap with the superior Lore – though Cate Shortland’s film dealt with the fleeing offspring of a Nazi officer, there must be a limit to the number of postwar feral German kids the arthouse market can absorb in a short space of time.

The horse-killer is resourceful urchin Fritzchen (Lorenczat), but it’s the point of view of his dreamier, far less together older brother Hans (Liam) that the film adopts. They live with their sick mother in an abandoned tower (one of many echoes of folk tale tropes and locations), and before long she’s departed for the next world, making them promise never to forget their names, and telling them to head for Lithuania, where a farming family will take them in.

This is the start of a journey that takes the brothers east, avoiding roads and grown-ups as far as possible, through a landscape of forests, meadows and marshes. Soon, attempting a river crossing under fire from Soviet troops, the two brothers are separated, and we stay with Hans as he hooks up with a raggedy bunch of other kids led by Christel, a girl of his age.

Ostermann and his cinematographer Striker deliberately remove all geographical markers from the journey to evoke these orphans’ own sense of disorientation as they are forced to harden up and feed themselves on berries, frogs and whatever else they can find. Nature is blank and ungiving at times, but also a refuge, and Hans (and the camera) is often distracted by the sudden beauty of clouds, reeds or a grasshopper perched on his hand (though we’re always half expecting him to eat these Malick-esque specimens). The few houses the band come across on the way are sources of danger or places of death, and even when some grudgingly sympathetic adults appear, their help is never given for free.

Gradually, Hans travels into a space that is part real and part dreamscape, culminating in a symbolism-laden encounter with a boatman. It’s a disappointment for the audience when he’s dragged back out of this cocoon, which would have provided the film with a convincing arc in which a boy who is forced to lose his childhood literally loses himself in nature. The anti-climactic ending – which sketches in the mixed Lithuanian reception of the ‘wolf children’ – is one of the stylistic wobbles in a film that never quite lives up to the glimmers of brilliance that shine through here and there.