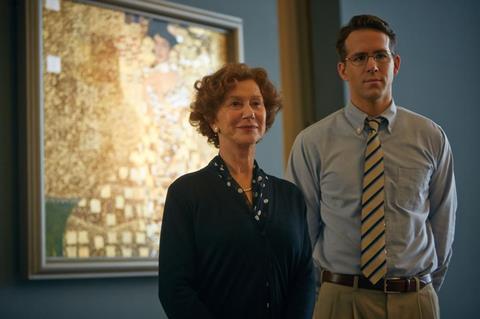 A classy real-life story of one woman’s journey to reclaim her family’s heritage in the face of opposition from the Austrian establishment, Simon Curtis’s impressively staged drama features yet another towering performance from Helen Mirren as an elderly Jewish woman who seeks to retrieve family possessions stolen by the Nazi’s some 60 years earlier, amongst them a famous Klimt painting now deemed to be an Austrian national treasure.

Mirren is funny, feisty and steely as Maria, a woman torn between trying to leave the past behind and seeking justice.

Though perhaps lacking in a real sense of dramatic tension; veering towards the schmaltzy at times and needing a far tighter ending, Woman In Gold is still a thoroughly enjoyable story, engagingly told and with a nice line in gentle humour to balance the legal battle structure which can veer to dryness at times. It is an often enthralling real-life story, shrewdly punctuated by flashbacks that help tell the story of a wealthy Jewish family whose lives are torn apart by the Nazi occupation of Vienna.

Mirren’s amusingly strident Maria Altmann is a terrific character for the actress, driven by a determination to seek justice for what happened to her family and her heritage, but also reluctant to face up to the realities of what happened to in Vienna, a city she has refused to visit since her escape sixty years earlier.  The film also features an engagingly subtle performance by Ryan Reynolds as inexperienced lawyer Randy Schoenberg – the son of a family friend of Maria and whose family also has links in Austria – and offers a nice change of pace and tone for the actor.

After the death of her sister, Maria comes across a letter her belongings about unsuccessful attempts to recover five Klimt paintings which had belonged to the family and which now hang in Vienna’s Belvedere Gallery. She thinks she has a case for restitution, and after seeking advice from the initially reluctant Randy, the pair head to Vienna but are faced with a blunt determination from the authorities to keep the paintings in Austria. The painting is now simply know as Woman In Gold, rather than its original title, Portrait Of Adele Bloch-Bauer I, a portrait of Maria’s beloved aunt.

Together – and with help from Austrian journalist Hubertus Czernin (Daniel Bruhl) – they embark on a lengthy legal battle, taking on the Austrian establishment and even heading all the way to the US Supreme Court. The legal journey is set alongside of the newly married Maria (Tatiana Maslany) and her family’s suffering at the hands of the Nazis who earmarked stealing the family’s art treasures early in their occupation of Vienna.

The Viennese locations add much to the story, while a series of nice cameos – Moritz Bleibtreu as Klimt; Elizabeth McGovern as a Los Angeles Judge and Jonathan Pryce as a Supreme Court Chief Justice – help the film’s sense of class and intelligence. Mirren is funny, feisty and steely as Maria, a woman torn between trying to leave the past behind and seeking justice, and though there are a few structural missteps the film ultimately works as an enthralling real-life drama.