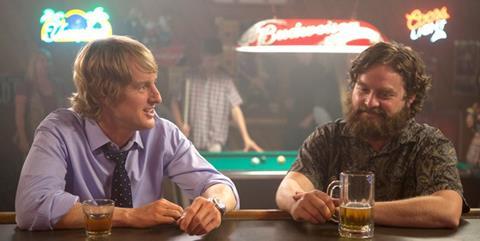 A hackneyed dramatic comedy, short on laughs, Mad Men creator Matthew Weiner’s first foray into big-screen moviemaking is deeply flawed and unfocused. If Weiner’s hit TV series, concerning the vices of 1960s Madison Ave advertising executives, slices into its masculine universe with a scalpel, You Are Here approaches its issues with a dull knife.

You Are Here strives to be a film of great sensitivity.

There is but a single pointed shot in the entire movie—and it’s the last one, coming far too late to bring this earnest, but misguided affair some much needed direction. A high-profile cast—lead by Zach Galifianakis and Owen Wilson—is sure to lift the film out of obscurity, but it’s not likely to travel too far from there.

Funnymen Galifianakis and Wilson play two best friends Ben Baker and Steve Dallas, whose only common bond is getting stoned. While Galifianakis’ Ben is a counter-cultural recluse who lives in a run-down shack, scribbling grand ideas in a spiral notebook about the dangers of the “system,” Steve is a womanizing weatherman, who drives a sporty red convertible and doesn’t take life seriously.

Can the mentally unstable Ben realize his dream of turning the family estate into a Utopian back-to-the-land society? Will Steve come of age, eventually transcending his adolescent ways? And will Steve, the ultimate cad, and Angela, the wholesome good-spirit, get together, despite their differences?

You Are Here is rife with clichés: We’ve seen Wilson’s sexist suave guy countless times—even his occupation is familiar from Anchorman’s Ron Burgundy. The Mad Men creator only needs to look to his own Don Draper for a similar characterisation that is far more sophisticated. Furthermore, Poehler’s bitchy sister is one-dimensional, and Ramsay’s pure-of-heart gentility stretches credibility.

One of the film’s many faults is that the relationships are unclear. In the beginning, one might think Steve and Ben might be some kind of freak siblings. When it becomes apparent they are just old friends, Weiner never conveys the origins or reasons for their relationship. And without understanding the fundamental relationship that undergirds the story, the movie doesn’t hold up.

Galifianakis’ portrayal of Ben—who is diagnosed mid-way through the film with bi-polar disorder—is an intriguing riff on the clowns the actor is usually associated with (i.e. The Hangover). Seeing the rotund man stripping off his clothes and running into the forest would normally be a cause for laughs, but the film seems to suggest that such behavior is not comical, after all, but kind of sad. This might be a shrewd comment on the part of Weiner, but it’s problematic for the film’s humorous side. Early on, for example, Galifianakis wrestles with a security guard in a bit of physical slapstick, but the joke falls flat. Was it supposed to?

You Are Here strives to be a film of great sensitivity. Clearly, Weiner is trying to say something meaningful about our relationship with the earth and living a better life, more in sync with nature and the people around us. (Though this theme seems to run counter to the idealistic way in which the movie portrays psychoactive medications.) But rather than addressing these ideas with the complexity of his TV work, Weiner has made a heavy-handed, awkward movie.