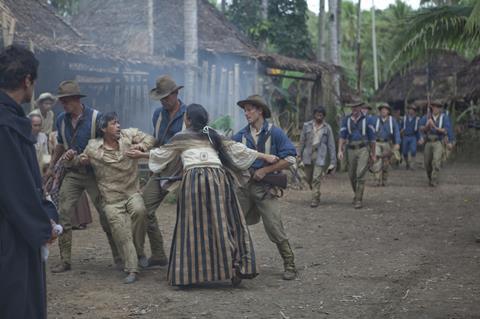 John Sayles’ impressively mounted delve into the American history and the country’s occupation of the Philippines in around 1900 hits all of the right targets as he uses it as a metaphor for the current US military involvement in Iraq and Afghanistan, despite the fact that it is rather heavy-handed and predictable in tone.

Amigo features an all-guns-blazing performance by Chris Cooper (a regular in Sayles’ films) as Compton’s brutally tough commander who favours torture over talking.

As usual Sayles wears his heart on his sleeve – and his independent sensibility is always to be admired – and this well-made film is to be supported with regards some of the parallels he is drawing. Frustratingly Amigo is let down by a rather uncharismatic lead performance by Garret Dillahunt and just too many clichéd characters. Theatrical take-up is likely to be limited, though the film could well have a life on DVD and television.

In the remote San Isidro barrio, a rice-growing area of Luzon far from the capital Manila, US soldiers led by Lt Compton (Dillahunt) arrive hunting rebels to the US occupation, and seeking to set up a good relationship with the villagers.

Rafael Dacany (Joel Torre), the village leader, wants to try and get on with the military, but he is placed in precarious position. He has to deal with Compton through the conniving Padre Hidalgo (Yule Vazquez); his brother Simon (Ronnie Lazaro) is leader of the local rebels, and Rafael’s son also decides to join the armed uprising.

When the US occupation switches from a policy of trying to win ‘hearts and minds’ (and yes, one character even uses that phrase) to a tougher approach to the locals, Rafael has to make sure hard decisions.

Amigo features an all-guns-blazing performance by Chris Cooper (a regular in Sayles’ films) as Compton’s brutally tough commander who favours torture over taking, but in the whole the performances are workmanlike rather than compelling. There are some nice moments, though running over two hours the film does feel as if it could have been somewhat tighter.

Amigo featured in main competition at the San Sebastian Film Festival and also screened in Toronto.