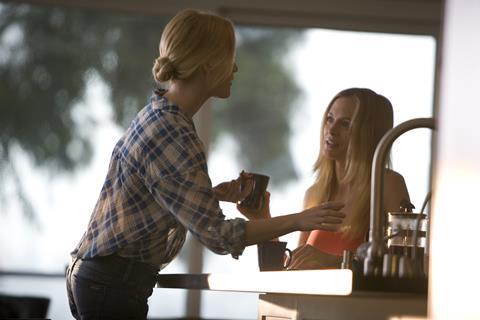 The pornographic film industry has been blamed, among other things, for the exploitation and ruin of many of its performers. Cherry flips this indictment improbably, portraying the skin biz as a bumpy Yellow Brick Road to a young girl’s personal fulfillment.

Starry-eyed Ashley Hinshaw seems as suited as any pretty ingénue for the film’s inanities.

As a non-stop unintended punchline, Cherry could also find a home on the Midnight Movie circuit. And if young Ashley Hinshaw’s career takes off, a movie showing her taking her clothes off, no matter how ridiculous, will generate demand.

In its rosy vision of that world, Cherry is ill-served by its dream team cast, although Graham does try, enduring what looks like partner-rape in a coupling between Margaret and her resentful porn-phobic girlfriend (Diane Farr). As Francis, an uninspiring Franco phones in his performance. Dev Patel seems lost as a lovestruck friend/roommate who wants more from Cherry. Lili Taylor’s boozy mom is by-the-book. Cherry’s path toward porn is a boilerplate trail of tears  - plus an improbable happy ending - ready-made for an Oprah-style group hug on TV if the film gets a release.  Starry-eyed Ashley Hinshaw seems as suited as any pretty ingénue for the film’s inanities.