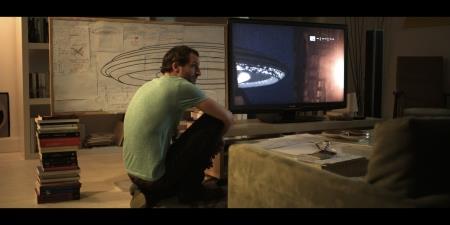 Timecrimes, which was picked up for remake by DreamWorks, has focused attention on Spain’s Nacho Vigalondo, and his ingenious follow-up, the low-budget comedy Extraterrestrial, justifies the fuss.

Extraterrestrial is an inventive chamber piece that marries the alien invasion and rom-com genres with a cheery sense of audience collusion.

Though it ultimately strains to make 94 minutes, Vigalondo’s take on a UFO “invasion” of Spain should find an extremely receptive home crowd and niche international audiences via Wild Bunch, especially on home video.Calling Extraterrestrial a “sci-fi” feature is perhaps something of a stretch, as Vigalondo’s hovering spacecraft are merely the backdrop to a Madrid apartment where an amusing Euro rom-com is about to play out.

The film opens to the sound of throbbing club music just before Julio (Julian Villagran) wakes up in Julia’s (Michelle Jenno) apartment with the mother of all hangovers. Evidence points to a drunken liaison, and both - who don’t even remember meeting each other - are sloping off to their respective corners when they notice that the Internet, television, phone, etc, aren’t working.

A quick look outside the window reveals that the mother of all spaceships - about 14 miles wide, according to structural engineering student Julio’s quick calculations - is hovering over Madrid, and, in sleeping off the night before, they’ve managed to miss the entire city being evacuated. Only Angel (Carlos Areces), Julia’s stalker neighbour, remains, because even the threat of an alien invasion can’t dampen his obsession with her.

Soon enough, though, Julia’s boyfriend Carlos (Raul Cimas) comes back from the evacuation camps to find her, and the film starts to take on Shallow Grave-style intimations as Julia and Julio are forced into rapidly escalating manoeuvres to hide their liaison from Carlos.

Chief among their ruses is the suggestion that aliens may have already infiltrated Madrid and bodysnatched, say, Angel, when he threatens to blow the whistle for his own nefarious purposes.

Evidently made on a shoestring, Extraterrestrial is an inventive chamber piece that marries the alien invasion and rom-com genres with a cheery sense of audience collusion. Despite Vigalondo’s sustained inventiveness, though, the limitations of the scenario (and, no doubt budget) make themselves felt with scant exteriors and cast, although Miguel Noguera as a member of the “resistance” who fronts a guerrilla TV network is a welcome addition to the crew. Technical credits are fine, and, once again, the suggestion of a remake may well be mooted.