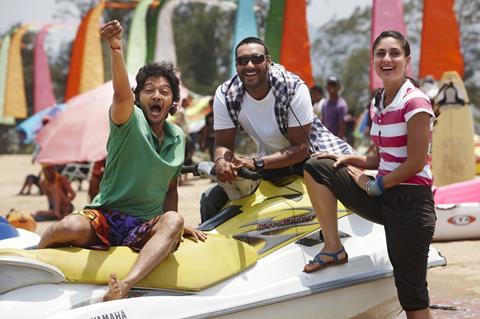 Golmaal 3 will, like the earlier two previous films in the series, be either intensely loved or hated, with Yunus Sajawal’s script an unending cycle of one comic situation after another. But so what if they are silly, absurd and even juvenile – the films have been getting people into cinemas, with this new film having grossed  some $25 million worldwide since its November 5 opening, one of the highest ever for an Indian movie.

Ratna Pathak brings a touch of sanity to the mad, mad, show as a woman torn between the boys she raised and the man she had never thought she would see again.

But, for those who seek something beyond slapstick, Rohit Shetty’s work will be disappointing. A clichéd story about a disco-dancer-turned-schoolbus-driver, Pritam (a tired looking Mithun Chakraborty), and the woman he loved, but could never marry, Geeta (Ratna Pathak), who take off with the two small groups of orphaned young men - each have been raised separately – who are constantly fighting.

Of course, they do not know that Pritam and Geeta were once in love, until her rich father (Prem Chopra) broke up the relationship. Dabo (Karena Kapoor), also an orphan, is on board with an eye for one of the men, while Gopal (Ajay Devgn), steps in, not just to get the elderly couple united, but also to knock sense into the boys.

The youths, including Gopal, Madhav (Arshad Warsi), Laxman (Shreyas Talpade) and Lucky (Tusshar Kapoor), push and shove the narrative along, often peppering it with inane wit and actions that seems to have been copied from circus clowns. Most scenes have been shot in a studio, and the film’s presentation of Goa - where the movie is supposedly set - looks awfully garish with buildings painted in screaming yellows and pinks.

But in the midst of all this bedlam, two performances make Golmaal 3 somewhat worth watching: Arshad Warsi is just wonderful as one of the young men not strong enough to take on the might of Gopal, while Ratna Pathak brings a touch of sanity to the mad, mad, show as a woman torn between the boys she raised and the man she had never thought she would see again.