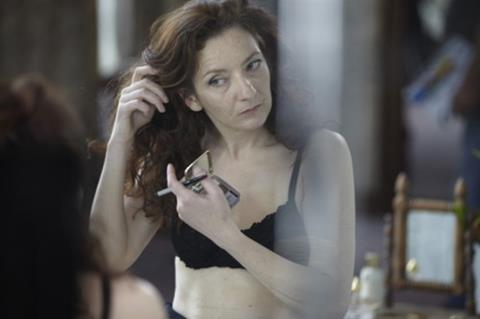 Actress Corinne Masiero puts a face on the term “working poor” - and what an unapologetically lived in face it is! - in Louise Wimmer, an involving first fiction feature from doc-maker Cyril Mennegun. Pushing 50, cranky but resourceful Louise is living in her car, somehow stuffing her long limbs into the vehicle that holds the pared downpossessions that aren’t in the public storage unit she can no longer afford to maintain.

A deceptively small film with an incredibly rich performance at its heart.

In well-observed and absolutely convincing increments we learn what Louise’s wearing routine is like. She has a job as a chambermaid in a small hotel with bare bones decor. Louise doesn’t waste energy or spout pleasantries because she has no energy she can afford to waste.

As a non-judgmental piece of contemporary social commentary and as a showcase for Masiero’s fearless presence, this is a carefully constructed tale one doesn’t soon forget — a deceptively small film with an incredibly rich performance at its heart.

The Venice Critics Week entry opens in France in early January and is definitely worth a look for fest programmers and distributors who think the way the disenfranchised among us now live belongs on their nation’s screens.

Louise works hard and earns money - just not enough. In addition to the hotel job she has a regular gig off the books cleaning a large private home whose owners obviously trust her. The young man at the local pawn shop does what he can to stretch her microscopic income.

A woman café owner in the same age bracket as Louise fills her thermos with coffee and acts as a mailing address. Louise has no resources for the moment but she’s not a homeless person so much as she’s a person without a home.

She has been maintaining appearances while waiting for a French government housing agency to fill her request for an apartment. Louise complies with all the bureaucratic steps, but nothing happens. Louise keeps clean in public restrooms.  She’s not stupid or illiterate or an undocumented immigrant or ex-felon. She shouldn’t have to lurk at a cafeteria like a patient vulture until another patron leaves in order to surreptitiously eat what’s left on a tray. She shouldn’t be mired indrudgery and boredom.

Gradually, organically, we learn that Louise was once married. The contrast between what we imagine her former life to have been like an the harsh reality of her current circumstances demonstrates with an accretion of detail and no didacticism that anybody can find themselves on a slippery societal slope, proudly hanging on for dear life.

We hold our breath when Louise lurks in a car park by night to siphon the gas she needs. Now and then Louise meets the same man in a hotel room for lively, imaginative sex. He wants “more” - she cherishes the uncomplicated pure physicality of the arrangement. The frank sex scenes are lusty interludes of mindless release in an otherwise crushing routine.

When Louise’s car has engine trouble, we wish we could help. We have been drawn into the juggling act of her life and can envision the domino knock-on effect if she can no longer drive to work. Because France still has a social safety net, there is hope that Louise will have a private place of her own one day. In many other countries a divorced middle-aged woman might not have even that to keep her going,  striving, hoping. Her resilience is inspiring and we can’t help but wonder what we’d do in her situation.

Like the title says, this is Louise’s story in every frame. She’s ornery and gruff but she has good reason to be.  It’s only 80 minutes long but in Mennegun’s capable hands, that’s long enough to feel as if we’ve known Louise for years.