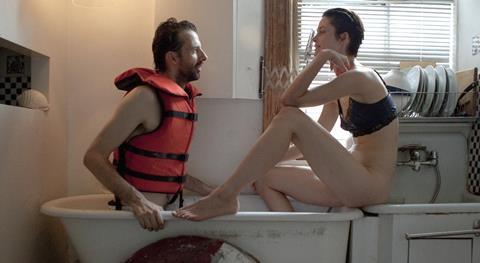 As the odd couple follow the often-bizarre directions of the people he waylays (plus, via Skype, his own enthusiastic father back in New Zealand) so the film explores the reality/unreality of movie making.

The resulting unlikely plot offers some hippy fun with skinny Habicht himself as the droll lead and some seriously sexy scenes with statuesque Russian actress Masha Yakovenko, but the main laughs come from the contributions of ambushed New Yorkers, many in dire need of dental work but all ready with script advice and keen to sign their release forms. Love Story won the top award at last year’s New Zealand Film Festival and has since proved a movie-lovers’ choice for further festivals.

Habicht migrated to New Zealand from Germany with his family at the age of eight. Early features like Woodenhead (2003) displayed a precocious talent and in 2009 he was the inaugural recipient of the Harriet Friedlander Residency, which sent him to New York for as long as the $80,000 award would last. As the money was running out he started work on Love Story, the springboard for which was his sighting on the subway of a pretty girl carrying an uneaten slice of fancy cake on a plate.

He restages this with the super-cool Yakovenko and, when he introduces himself outside Coney Island station, she flirts back. Passers-by assure him that cake-carrying girls are definitely looking for love. Increasingly obsessed, he sets out to win her, eventually getting her into his cramped and seedy digs.

As the odd couple follow the often-bizarre directions of the people he waylays (plus, via Skype, his own enthusiastic father back in New Zealand) so the film explores the reality/unreality of movie making. Together they restage the love scene from Titanic in his battered bathtub. Habicht might be falling in love — and who could blame him? — but the hired Yakovenko insists she’s only acting.

It is shot (by Maria Ines Manchego) hand-held in guerrilla style with available lighting, and edited (by script collaborator Peter O’Donoghue) from, no doubt, many hours of possibilities. There’s a soundtrack of once-used movie music from such composers as Ennio Morricone and Nino Rota.

At one point consulting a Tarot reader, Habicht cannily asks “will my film get into festivals?” Indeed, Love Story is probably best seen in a cinema full of film buffs.