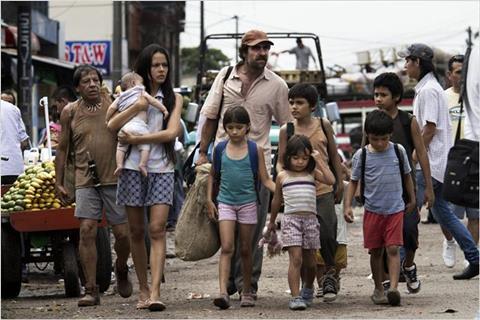 Luis Tosar, such a magnetic, film-stealing villain in Cell 211, morphs into a persecuted Colombian peasant in director Miguel Courtois Paternina’s social drama Operation E, based on real-life events which took place after FARC narco-guerillas captured the hostages Ingrid Betancourt and Clara Rojas in 2005.

Tosar is believable against type as this persecuted Colombian who becomes almost a pathological liar in increasingly desperate and ultimately futile attempts to save his family.

Courtois consolidates his record of producing solid political dramas for the big and small screen from Wolf (El Lobo, 2004) on up with this sincerely felt story about a man and his family who are hopelessly caught in the middle of an endless conflict. With strong technical credits - Operation E was shot close to the area where events took place - this should perform well in Spanish-speaking and ancillary markets although a Cell 211-style breakout seems unlikely.

Courtois’s solidly-made, episodic film is concerned with the plight of the estimated four million people who have been displaced in the long-running narcotics-driven between FARC, set up as the military arm of the Communist Party in 1964, and the Colombian authorities, backed by the US. But FARC, with its penchant for child soldiers, and the authorities, faceless in this film, are given equal measures of contempt as Operation E hones in on desperately poor coca farmer Crisanto (Tosar) and his plight.

Caught in a no-man’s-land in La Paz between the guerilla camps and fresh assaults by the authorities, Crisanto’s life is hard-scrabble to start - trading his cocaine paste for favours and food - and quickly deteriorates. Married to Liliana (Garcia), whom he “captured” in the jungle when she was 15, the educated Crisanto is already father to five children when guerillas drop baby Pegui in his arms and make it clear that if the sick and mal-treated child does not survive, neither will his family.

Essentially decent, Crisanto and Garcia try to care for the child even as the guerillas - riven by internal rivalries - refuse medicines, but when his two oldest sons are captured into service for FARC, Crisanto realises he can’t talk his way out of this situation and the family flees, leaving everything behind - and not for the first (or last) time. Moving to the streets of El Retorno township, they try to get some help for this child, who turns out to be an important pawn in the narco-wars.

Courtois, half-French and half-Basque, clarifies complicated events on screen without detracting from the narrative momentum although this intimately-shot film can lack a big-screen sweep. Tosar, at least for non-native speakers, is believable against type as this persecuted Colombian (the credits reference two voice coaches), who becomes almost a pathological liar in increasingly desperate and ultimately futile attempts to save his family.