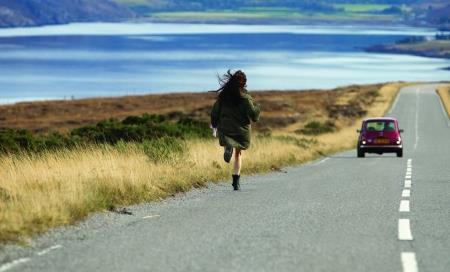 “Shell like the petrol station?” asks a man of the eponymous heroine of Scott Graham’s debut feature. “Shell like the beautiful thing you get in the sea,” the affection-starved 17-year-old replies.

Right from the opening moments, where he plays with proportions and perspective from the window of a truck, Graham has his say in Shell and he should find viewers who are eager to listen.

Extending his earlier short, Graham clearly knows and cares for Shell and the result is a beautiful performance by newcomer Chloe Pirrie and an unforgettable character. Manning a practically-disused service station in the remotest highlands of Scotland, Shell lives with only her broken-down mechanic father (Joseph Mawle) for company, yet her warmth radiates out to keep Shell on the map.

Intensely-felt and challenging for all involved, Shell, which premiered at the New Director’s competition at San Sebastian and goes on to play at the London Film Festival, may be too specialised for wider distribution, but it marks Graham and his leading actress as talents to watch and should benefit from extensive festival play. Graham has set the bar high for himself in his feature debut and mostly achieves his goals, although Mawle’s almost-mute Pete is a heavily-loaded character, perhaps overly so.

Shell gives the viewer much to digest; visually, it’s a completely unexpected take on the Scottish highlands and often brilliantly so. Through Yoliswa Gartig’s crisp camera, the pale blues and icy moonlight are cut through with moments of flashing scrub to make Shell seem otherworldly, not even Scottish. Added to the howling wind - a considerable achievement for soundman Chris Campion, given the elements - it’s enough to send a shiver down your spine. Sometimes we don’t see a car for a week in winter, Shell says, and you can believe it.

Shell is pale too, abandoned by her mother when she was four and homeshooled by her father. All is clearly not right in Shell’s world, but she’s intrinsically a bright soul who has an effect on everyone she encounters. Pete, meanwhile, is taciturn, damaged, an epileptic who is terrified of physical warmth, perhaps for good reason. He repairs cars which are involved in frequent accidents in the area, often due to collisions with the local deer (a motif for the film, although slightly over-played).

This leaves Shell alone to deal with the attentions of local loners (Graham again draws strong performances from Michael Smiley and young Iain de Caestecker) when all she really wants is her dad. Perhaps too much.

Graham’s shorts - Shell, and in particular Native Son, which played at Cannes - have provided a strong sense of where this young director’s preoccupations lie. As a feature debut, Shell fulfils these expectations while holding out the promise of more to come. Right from the opening moments, where he plays with proportions and perspective from the window of a truck, Graham has his say in Shell and he should find viewers who are eager to listen.