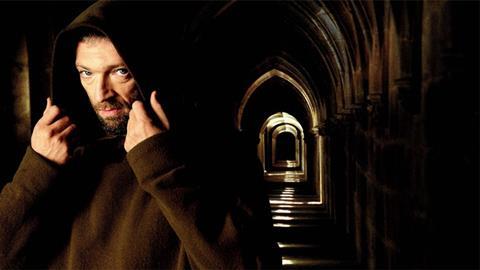 Good! Evil! Atmosphere to burn! The Monk (Le moine) the latest screen iteration of Matthew G. Lewis’s notorious 1796 anti-clerical novel much beloved by the Surrealists is anchored by an impressive turn by Vincent Cassel as a pious, hard-working priest whose faith is tested.

Three quarters of the film are delectably creepy with a druggy soupcon of camp propelled by a feel-unease-NOW score.

Full-bore gothic shenanigans should get some attention where the book’s reputation sparks curiosity and wherever vintage babes, blasphemy and depravity are sold. Director and co-adapter Dominik Moll has gone all-out on the visual side of this guilty pleasure that deflates somewhat en route to the finale.

As with Moll’s previous two features (Lemming, With a Friend LikeHarry) there are memorable scenes and characterisations linked to the sudden intrusion of people to whom attention must be paid. But here the final stretch, which should be devastating, sort of peters out.

Still, three quarters of the film are delectably creepy with a druggy soupcon of camp propelled by a feel-unease-NOW score. Despite a cast of devoted monks, Of Gods And Men it ain’t.

Lewis was only 19 when he wrote gothic classic The Monk in just 10 weeks while working at the British Embassy in The Hague.  Set in 17th century Catholic Spain, it was previously made into a film in 1972, from a script by Luis Bunuel and Jean-Claude Carriere.

This version takes itself very seriously, but the moral (if expressed in contemporary colloquial English) remains: Religion sucks, steer clear (and do watch out for the Devil). The film begins in total darkness and ends in blazing sunlight; dark scenes are really dark and bright scenes are really bright. It’s all symbolic, but fittingly so.

At the outset, Ambrosio (Cassel) is taking confession from a man whose debauched behaviour would be hard to top. The nameless sinner turns out to be Sergei Lopez. To a query about Satan, Ambrosio replies that “Satan only has the power we grant him.”

Uh-huh. Verbal Kint - Kevin Spacey’s character in The Usual Suspects - would have LOVED The Monk.

In a florid flashback set in 1595, a child who was to have been drowned is instead left on the doorstep of an abbey outside Madrid.  The infant boy bears a very distinctive birthmark on his shoulder. He is raised by the brothers and at age 18 enters the order, growing up to be a respected priest and compelling orator. Cassel exudes otherworldly gravitas and his singular looks are perfect for the role.

At one of his sermons about how evil is powerful but temptation only fells the weak, a lovely young woman named Antonia (Josephine Japy) passes out. Young nobleman Lorenzo (Frederic Noaille) carries her to a cooler spot and is instantly smitten by her beauty and poise. Antonia lives with her ailing mother, Elvira (Catherine Mouchet), who is opposed to well-born Lorenzo seeking to wed her commoner daughter.

Mom - who has a doozie of a past - knows from sad experience that a love match across class lines is doomed. Lorenzo will not be the only male coveting Antonia’s virginal beauty.

Meanwhile, when ultra-devout Ambrosio isn’t performing exorcisms or suffering from blinding headaches, he’s troubled by a recurring dream in which a young woman clad in red is seen praying in harsh sunlight.

A young man named Valerio who was terribly disfigured in the fire that killed the rest of his family arrives at the abbey. Valerio wears a smooth expressionless mask at all times because he has no nose or lips and his remaining skin is vulnerable to the light. (The mutilated lad is played by a skilled actor whose identity is best left unstated in the interests of suspense.)

The other monks have reservations about accepting him into their midst, but Ambrosio decides it’s the Christian thing to do.

When one of the novices in her care turns out to be pregnant, the ferocious abbess (a terrifying Geraldine Chaplin) is no meaner than, say, Torquemada. By the time the foreboding image of the praying woman in red takes form in the waking world, Ambrosio’s soul doesn’t have a prayer.

Lewis’ contribution to the gothic genre was to eschew convenient explanations for supernatural forces and apparitions. Moll uses quaint touches like iris in/iris out and, via painterly photography, makes the most of the contrast between the cool inner sanctum and the sun-baked landscape.

Nuns walking single file across parched terrain look like penguins. But at least one protagonist is headed to a rather hotter place than the South Pole.

Screenplay: Dominik Moll and Anne-Louise Trividic, based on The Monk by Matthew G. Lewis