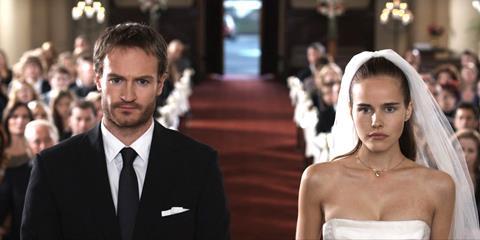 The Wedding Party earned plenty of laughter when it opened the Melbourne International Film Festival (MIFF) on July 22, mostly for its spot-on depiction of the awkwardness of a good deal of human interaction.

The film’s message, that all will be well in matters of love if honesty prevails, proved heart-warming on a cold night.

At its heart this fresh, good-natured romantic comedy is a portrait of an “average suburban family” viewed through the prism of relationships, love, sex and fetishism - and the bedtime action was certainly a crowd pleaser. Though, the whole does not measure up to the many genuinely humorous moments, it will suit those who like their cinema to be a bit odd.

Using undertones of farce, the film tells of a marriage of convenience with a twist: handsome dopey Steve (Josh Lawson) agrees to marry beautiful young Russian Ana (Isabel Lucas) not because he is bewitched by her model-like looks, unlike his randy father (Steve Bisley), but because he is desperate for the large bag of cash that will come with helping her stay in the country.

The betrothal has to be kept a secret from his girlfriend (Kestie Morassi), whom he is trying to win back, and explaining his quick change of heart to his extended family is difficult. Eventually a jealous Russian boyfriend reveals the truth.

The film was part funded by MIFF’s own Premiere Fund and the humour, its affectionate tone and the terrific ensemble cast made for an entertaining light-hearted start to the seriously regarded annual event.

The film’s message, that all will be well in matters of love if honesty prevails, proved heart-warming on a cold night. Maintaining momentum throughout was the problem. Too many stories made the overall length excessive. That said, a dynamic debut filmmaking team has been born.