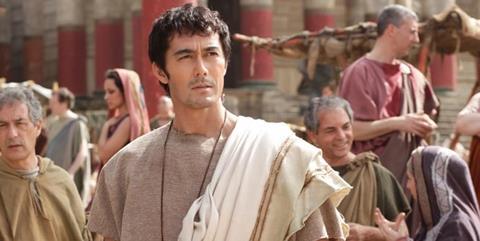 A time-travelling comedy that transplants a bathhouse architect from ancient Rome to modern-day Tokyo, Thermae Romae (which translates as ‘Roman Baths’) is an engagingly over-the-top romp that has already been a hit in Japan and made an engagingly oddball appearance at the Toronto Film Festival.

The film isn’t without a genial sense of fun, merely that the one joke runs out of steam far too soon.

Based on Mari Yamazaki’s popular manga series and filmed at Rome’s Cinecitta Studios, he film may well appeal to fans of the more wacky Japanese films, and it could well have a life on niche home entertainment labels.

The film opens in 128AD where bathhouse architect Lucius Modestus (Hiroshi Abe, who starred in Still Walking) is having a hard time coming up with a new design to impress emperor Hadrianus (Masachika Ichimura).

Bizarrely he finds himself sucked into an aqua vortex that sends him to present-day Tokyo, where he is soon inspired by the Japanese obsession for their national bath culture. Cue plenty of gags about his confusion about modern-day hygiene – and sheer amazement at an automated toilet bowl – but soon brimming with ideas he travels backs to Ancient Rome and develops a whole new line of public and private bathing.

Sadly the jokes soon dry up and the film heads off into more melodramatic territory, with Lucius embarking on a relationship with wannabe manga artist, Mami (Aya Ueto). Flashily directed by Hideki Takeuchi, who makes good use of the stylish sets and nice CGI, the film isn’t without a genial sense of fun, merely that the one joke runs out of steam far too soon.