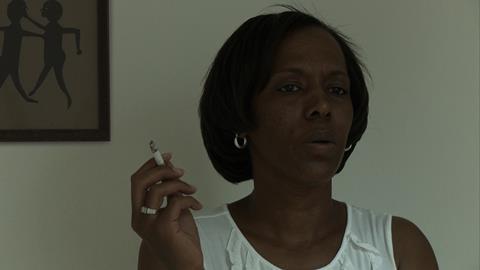 James Benning moves from the place to the face in 20 Cigarettes, an unblinkingly close-up study of 20 of his friends as they pull on a cigarette. Each shot lasts as long as it takes for the smoker to finish the stick, although some puff down to the bitter butt and others cut it shorter. It feels like a Warholian homage, following in the vein of Sleep or Eat without the frisson of Blow Job.

Benning’s film, while studying the reality of the face, is also at odds with it, and there’s a nice tension between the two.

Unlike Benning’s other work, which has focused on the environment, 20 Cigarettes is an entirely artificial construct. His friends are deliberately placed in the frame and left alone to be studied by the camera. A few puffs in and the cigarettes become a smokescreen: Benning’s interest is the human face in repose, although his subjects know they are in front of a camera.

20 Cigarettes is a museum installation, an addition to experimental and art festival sidebars. It’s a seductive, silent, rhythmic piece, which draws us to his faces and tempts us to paint in the information void through clues given by age, dress, ambient sound, attitude. They are placed against walls with little clue as to the environment. How often are we, in our daily lives, given the opportunity to study another human’s face so closely?

As for the cigarettes themselves, some of Benning’s studies - if not all - palpably relax as they reach their fourth or fifth drag, their expressions smoothing. Some are restful presences, others less comfortable in their own skin. The only voice comes mid-way through the piece, when a smoker calls to his dog, although in another there is a single, in-the-distance ‘fuck you!’ to be heard.

Off-screen sounds provide their own rhythm, from the clattering of dinnerware to trucks rattling by to a couple of (possible) gunshots in the distance. The first and last are the most memorable.

Smoking isn’t really a solitary habit, or at least, not all the time. Smokers generally tend to have one with a drink, with friends, as they work - rarely do they stand erect and puff in a solitary manner. So Benning’s film, while studying the reality of the face, is also at odds with it, and there’s a nice tension between the two.

Evidently, this is a specific film. Benning takes every credit on 20 Cigarettes, apart from his “actors”, shot from Bangkok to Seoul and all across the United States. It could be programmed with Sam Taylor-Wood’s portrait of a sleeping David Beckham, or any of the Warhol works, and in its staccato moves and artificial construct is a progression of the above.