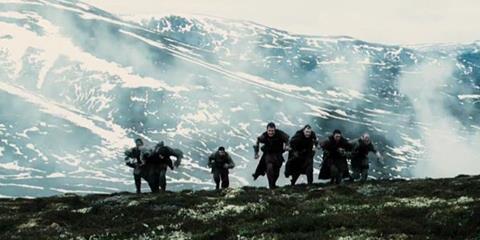 British director Neil Marshall’s refreshingly brutal story of a small band of tough-as-nails Roman soldiers taking on bloodthirsty Pict warriors certainly delivers in terms of action and violence, and features nicely showy performances by Michael Fassbender and Dominic West as the muscular Roman soldiers who can more than hold their own.

Centurion might lack the visual splendor and epic vistas of Gladiator, but it more than compensates with bruising and violent action scenes as Marshall sets about making his mark on the old-fashioned sword-and-sandal movie. The director has had success with previous genre efforts Dog Soldiers, The Descent and Doomsday, but this film sees him enter the bigger leagues in terms of cast, budget and effects.

The blood-letting and violence might well mean the film is aimed directly at the largely male genre crowd (Centurion has a 15 certificate in the UK) but Fassbender (whose films vary from art-house hit Hunger through to Tarantino’s Inglourious Basterds) and West (whose role in The Wire made him a household name) have enough star quality to attract wider audiences.

Despite an effective flashforward preamble, which shows Roman Centurion Quintus Dias (Fassbender) being chased through the snowy Scottish highlands, the story itself is pretty straightforward. It is 117AD and Dias and his fellow soldiers in a northerly outpost are attacked by fierce Pict warriors, with only Dias left alive and a prisoner (because he rather handily happens to be able to speak Pict).

He manages to escape his guards, and while being chased runs into the Roman Army’s Ninth Legion, led by General Titus Virilus (West), a career solider much loved by his men. The Legion is swiftly dispatched back to Scotland to track down Pict leader Gorlacon (Thomsen) with the assistance of mute Pict warrior woman Etain (Kurylenko), apparently the best tracker around.

Etain leads the Ninth into a trap that sees most of the troops slaughtered however and General Virilus is captured. After a failed attempt to rescue their general, the surviving handful of men, led by Dias, head off on foot, with Pict warriors lead by Etain hot on their heels.

Naturally some of the band – which includes David Morrissey, Liam Cunningham and Noel Clarke – meet sticky ends along the way, though they still manage to find time to stop off at the home of a rather beautiful young Pict ‘witch’ (Poots), who naturally takes a shine to Dias.

While the story may offer nothing new in terms of structure or plot devices, Marshall has developed into an action expert, and the brutal swordfights and close combat scenes are thrilling and bloody. Fassbender and West (whose role is rather limited) bring the appropriate beefcake charm, though the only real sour note comes with Kurylenko. She might look good, but she barely seems strong enough to hold her spear, let alone slug it out with the best Rome has to offer.

Neil Marshall skillfully crafts Centurion into an exciting and action-packed romp across Scotland, making good use of effects during the opening part of the film – especially when the Ninth Legion marches to its demise – before settling down to more tried and tested one-on-one fight scenes. Locations are impressive and Sam McCurdy’s washed-out cinematography works perfectly.

Centurion is the first of this year’s Roman action films to tackle the subject of the Ninth legion, with Kevin Macdonald’s The Eagle Of The Ninth due later this year. Other recent Roman films include The Last Legion (2007), which starred Colin Firth as an unlikely Roman soldier, and Disney’s glossy King Arthur (2004), which featured Clive Owen, both of which were modest successes.