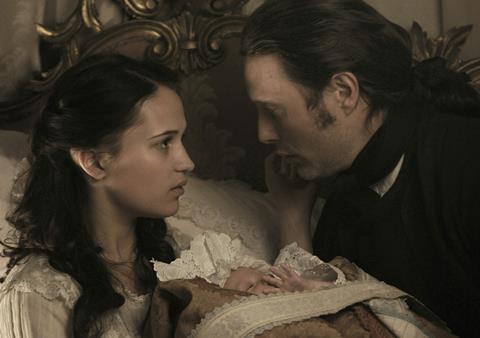 “We have no tradition of working with big, spectacular historical films in Denmark,” said Peter Albaek Jensen, executive producer on A Royal Affair.  “We came to get knowledge we couldn’t find locally in Scandinavia.”

Jensen said he was immediately impressed by the quality of Czechs’ work. “I’ve produced 150 features and if you can impress me, that’s something.

A Royal Affairis Zentropa’s first historical picture. “We’ve made probably around 100 films around Copenhagen,” Jensen said. “Films about ordinary people in ordinary Denmark in ordinary surroundings. Of course, after 100 films like that, it was time for a little exoticism.”

Jensen said he was very pleased with his experience in the Czech Republic and highly recommended the territory to other filmmakers. “I can see no reason to shoot in Scandinavia,” he said. “We’re talking about Lars Von Trier doing his next film down here. He wanted to do a historical piece so that would be obvious.”

Zentropa entered A Royal Affair three years ago. The historical story is well known in Denmark but has never been filmed.

“As long as I’ve been working in the Danish film business, people have been talking about making this movie, but nobody was able to make the proper script,” Jensen said. “But when I read Nikolaj [Arcel] and Rasmus [Heisterberg]’s script, I knew we had it.” Arcel and Heisterberg previously collaborated on the international hit The Girl With the Dragon Tattoo.

“This story is the biggest and most spectacular love story in the history of the state of Denmark,” Jensen said. “What can have more appeal than a secret, royal love story with fatal consequences?”

18th century Danish King Kristián VII (Mikkel Boe Folsgaard) suffered from mild schizophrenia. He made his court physician, Johann Struensee (Mads Mikkelsen), a state counsellor. Eventually the doctor became lover to Queen Karolina Matylda (Danish Shooting Star 2011 Alicia Vikander) and de facto ruler of the kingdom. Struensee made many political enemies in court, however. His adversaries ultimately convicted him of offending the crown and sentenced him to death.

The project has strong prospects, not least of all in Scandinavia, where the story, director, screenwriter and actors are all well know. “We also hope that will go in Germany because the hero,  Struensee, is German,” Jensen said.

The project shot 40 days on the Czech Republic — 10 at Barrandov Studios and at the remaining on live locations in Prague and 20 other sites around the country. Jensen employed a 100-member Czech crew do the lion’s share of the work. “We have less than 10 Danish people down here,” Jensen said.

Jensen praised his Czech partners at Sirena Film, with whom Zentropa previously shot the 2008 thriller Fear Me Not, starring Ulrich Thomsen and Paprika Steen, and the work of Czech film commissioner Ludmila Claussova. “Meeting Ludmila was really what removed the last concerns about being here,” Jensen said, “so we were not so worried about what is, for us, a very big and very expensive film.”

In the end, the producers spent nearly half their is €5.5m ($7.7m) budget in the Czech Republic, where they were to receive a 20% cash rebate within 44 days of the conclusion of filming. Other financing came from Mitteldeutsche Medienförderung, Eurimages, the Danish and Swedish film institutes, the Nordic Film and Television Fund, and Danish and Swedish television.

“Without bragging too much I would say the fantastic script made this project actually quite easy to finance,” Jensen said. “It’s easy if you have a script that everybody loves.”

TrustNordisk is handling international sales. Jensen said a final cut will be ready for EFM. The film will be released in February 2012.

Next up: Zentropa is now in production on Susanne Bier’s new project, The Hairless Hairdresser, in Sorrento, Italy.