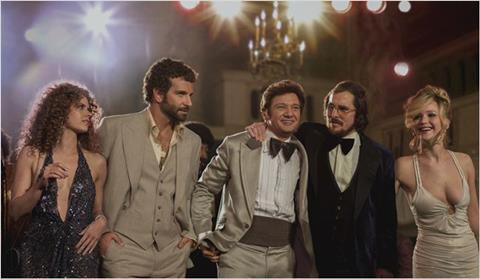 American Hustle is a movie about the guises we wear to construct new, better versions of ourselves, so it’s fitting that director David O. Russell’s conman comedy-drama is itself an elaborate dress-up, savouring its retro-1970s costumes and hairdos while also gleefully riffing on the freewheeling energy of Martin Scorsese’s mobster films. Regretfully, there’s a certain amount of easy mocking of period detail that the audience must endure, but on the whole American Hustle manages to be several things at once: a briskly entertaining caper, a thoughtful examination of the American tendency toward reinvention (and self-delusion), and a tricky love story between two odd ducks played beautifully by Christian Bale and Amy Adams.

As for Adams, this is some of the best work of her career, dropping her good-girl image for a convincing portrayal of a woman whose abundant sex appeal and seeming toughness mask deep loneliness.

Opening December 13 in the States, this Sony offering is well-positioned for awards consideration, but the film’s overt ‘70s style, starry cast (which also includes Bradley Cooper and Jennifer Lawrence), and crowd-pleasing sheen could make American Hustle a box office contender as well. Good reviews and a robust marketing campaign will put American Hustle on the radar of plenty of moviegoers, as will the fact that Russell is coming off two sizable hits, The Fighter and Silver Linings Playbook.

Set on the East Coast in the late ‘70s, American Hustle takes its inspiration from Abscam, a political-corruption investigation overseen by the FBI that led to the arrests of congressmen and other public officials. A heavily fictionalized account of the operation, American Hustle focuses on the travails of Irving Rosenfeld (Bale), a small-time conman, and Sydney Prosser (Adams), a beautiful woman who falls for him, adopting a British accent and a fake name to be his second-in-command on his scams to bilk suckers out of their money through get-rich-quick schemes.

But after Irving and Sydney are busted by ambitious FBI agent Richie DiMaso (Bradley Cooper), they avoid prison time by reluctantly agreeing to run cons for the government that will ensnare crooked politicians. Their undercover work brings them into contact with Carmine Polito (Jeremy Renner), a goodhearted New Jersey mayor who needs money for a valuable municipal project and steps into these scam-artists’ trap.

Russell, who co-wrote the screenplay with Eric Warren Singer, has envisioned American Hustle as a movie that both satirizes and sympathises with its deeply flawed characters. With his pathetically elaborate comb-over and toupee, Irving clearly aspires to a level of sophistication he doesn’t possess, while Sydney (with her stunningly revealing outfits) imagines herself to be far classier than she really is. American Hustle laughs at their pathetic self-deception, but the movie is also cognizant of the fact that, for them, it’s not self-deception: Through their love for each other, Irving and Sydney see the better versions of themselves that they’re trying to become, no matter how unattainable that might seem to the outside world.

That theme of reinvention reverberates throughout American Hustle: Just about every character is trying to convince everyone (including themselves) that they’re more than what they are. Irving’s wife Rosalyn (Jennifer Lawrence) fancies herself a wise old soul even if she’s a bit of a dingbat, while Richie seeks to become a major force in the FBI even though he’s far too temperamental. (Even Carmine, the least corrupt or deluded character, gets involved in Irving and Sydney’s scam because he wants to bring more jobs to his beloved city and boost its self-esteem.)

But Russell hides his characters’ pathos underneath a deceptively breezy, energetic surface that’s shot with rich vividness by cinematographer Linus Sandgren. Reminiscent of the panoramic sweep of Scorsese epics like Goodfellas and Casino (with a dash of Paul Thomas Anderson’s equally ’70s-retro Boogie Nights thrown in as well), American Hustle incorporates occasional voiceover and familiar period-specific song choices on the soundtrack to evoke an era but also give a grandness to the story.

This technique has its downsides: Russell’s desire to deliver a rollicking, nostalgic entertainment can make his movie seem derivative and glib. (American Hustle is the sort of period film where the audience is cued to chuckle smugly at the characters’ amazement at now-household items like a microwave.) But the confidence of the filmmaking is such that Russell gets away with his showboating style — particularly because his characters’ clear emotional longings are so apparent amidst the ‘70s razzle-dazzle.

Despite his tacky suits and unfortunate hair, Irving comes across as a wounded dreamer, the kind of two-bit hustler desperately trying to con other people so that he can convince himself that he’s not as miserable as he fears he is. Bale provides Irving with a core of neediness and vulnerability that’s quite touching, humanising what could be a fast-talking-weasel caricature. As for Adams, this is some of the best work of her career, dropping her good-girl image for a convincing portrayal of a woman whose abundant sex appeal and seeming toughness mask deep loneliness.

American Hustle perhaps puts too much stock in its con-artist plot — Irving is scheming how to outfox Richie, and Sydney pretends to be in love with Richie so that she and Irving can manipulate him (which, of course, will eventually begin to resemble genuine love) — but Adams is a wonder at revealing Sydney’s steeliness as well as her tenderness. Sydney and Irving are so perfectly matched because they believe they can stumble into a better life together, and Bale and Adams have a sweet chemistry that undercuts the easy mocking such foolish characters could arouse.

After winning an Oscar for her nuanced, deeply felt performance as an emotionally unstable widow in Silver Linings Playbook, Lawrence simply lets it rip as Irving’s exasperating, overbearing New Jersey wife. Flaunting plenty of sass and curvy sensuality, Rosalyn is all attitude, but impressively Lawrence transcends clichés for a funny, assured performance. (And there’s also some nuance in there as well, as witnessed by Rosalyn’s difficult encounter with Irving’s new soul mate Sydney.) And Lawrence’s Silver Livings Playbook co-star Cooper strikes the right balance between ridiculous and grounded as a fashion-conscious FBI agent who sees this sting operation as not just a fast-track for his career but also a way to land the gorgeous Sydney.

Like everyone in American Hustle, Richie has dated hair and a garish wardrobe, and while the movie spends a little too much time finding such cultural relics adorable, the commitment of Cooper’s performance suggests that Richie, like the other characters, is grabbing onto exterior forms of approbation to make themselves whole. They’re conning each other, but maybe also themselves.