An Episode In The Life Of An Iron Picker 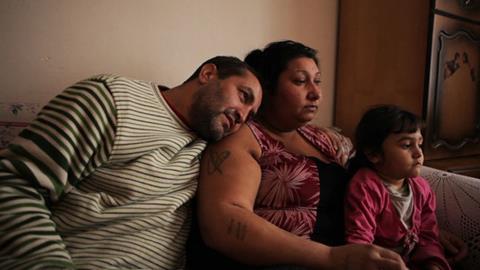 Writer/director Danis Tanovic goes back to his documentary roots and comes up with a bleak slice-of-life piece, suggesting a harsh life for the Roma in his native Bosnia-Herzegovina, detailing a dramatic version  of events which took place a couple of years ago, with the real protagonists replaying their parts. This disenchanted image of misery and discrimination is not likely to find many takers in regular theatrical distribution, but festivals will certainly show keen interest.

Tanovic paints a desolate but sadly authentic portrait of stagnant poverty that doesn’t even consider the option of rising up in protest.

Tanovic, best known for his Oscar-winning No Man’s Land, and who at one point had attempted to enter political life at home, evidently found something in the news at Christmas 2011 to reflect his political stance. He checked the facts and then went to a small Roma village of Poljice and found Nazif Mujic and Senada Alimanovic and asked them re-enact their story for his camera.

Once they accepted, guided only by their recollections and without any other script to speak of, rejecting any temptation to over-dramatize or interfere with their natural behavior, Tanovic simply stands back and invites them to go again through the same sequence of events they are so familiar with, using the same locations, allowing the facts to speak for themselves and inviting the audience to reach the inevitable conclusions.

Mujic and Alimanovic live with their two little daughters in a rambling shack, in a disaffected village, next to an industrial, heavily polluted, area.  His only source of income is picking up and selling scrap iron, either by taking apart the carcasses of abandoned cars or scavenging the next door dump A measly, unstable livelihood at best. The couple has no health insurance, judging by their names they are not officially married, the electricity bill hasn’t been paid for ages and they barely get by on what little they have.

But they are a loving couple, almost a happy family despite all the penury around them, until Senada has a miscarriage. The ER room at the hospital stops the immediate hemorrhage but for any further intervention, they want the money first before they lift a finger, unless there is a document proving an insurance company will pay the bill.

Since an iron picker like Nazif will never get his hands on even a fraction of the sum demanded and after all his pleas to have Senada treated first and allow him to pay later, in installments, fall on deaf ears, he has to take her home. Then back to the hospital when her condition deteriorates, and again back home, in a humiliating, inhuman, despairing process out of which there seems to be no way out, short of cheating the system to survive.

Though they have plenty of reason to do so, Nazif and Senada never raise their voice or overturn a table, for like so many others in their condition, making waves is not an option they consider.  Don’t expect any big statement at the end, just the suggestion that nothing is about to change, that next time something similar will happen, it may be even worse, but no one feels there is anything that should be done about it.

Doggedly following the couple around with his hand-held camera, sparing his audience neither the small irritations nor the major crises, Tanovic paints a desolate but sadly authentic portrait of stagnant poverty that doesn’t even consider the option of rising up in protest, but rather vegetates from one day to another. Shot in winter time, the gritty images suggest the wretched kind of life these people have come to accept as inevitable while society is busily looking the other way.