Anatomy Of A Paper Clip 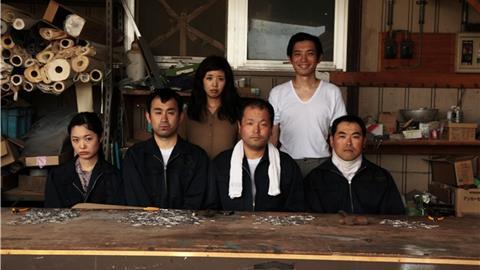 A wonderfully whimsical oddball delight, the amusingly titled Anatomy Of A Paper Clip might actually prove too slight and resolutely strange to prosper much beyond the film festival circuit, but its rather warm-hearted taste for the unusual and the quirky is to be applauded as it leaves its audiences with a quizzical smile.

The mannered movements of the actors, the clothing and the static camera placements combine to deliver something rather tender and odd.

While playing knowingly on accepted Japanese traditions of politeness, hierarchy and respect, this engagingly shot film leaps off into the obscure with its rather fairytale like story of a mild-mannered paperclip bender whose encounter with a butterfly in his minimalistic flat sees his world change. The film screened at the Rotterdam Film Festival.

Writer-director-producer-editor Ikeda Akira (who worked with his actors on his debut film Blue Monkey) has a strong sense of his material, and manages to create a Japanese world that feels vaguely familiar, but at the same time is like nothing close to reality.

Neck-brace wearing Kogure (the engagingly stone-faced Tomomatsu Sakae) is one of an unhappy foursome who bends paperclips at a ramshackle factory (well, actually a bench). He allows himself to be cursed at by his boss, and after dinner at the same restaurant every night he returns to his empty flat.

One day he finds a butterfly in the flat and lets it fly away. The next day he finds a woman in the flat – the surreal leap being that she is the butterfly transformed – who speaks nothing but gibberish (a language invented by the filmmakers). He lets her stay, as he does her father when he arrives, but when the father collapses she curls up in his flat and later becomes covered in a cocoon.

Add to the mix a dour-faced love affair between a couple at the paperclip factory; the financial problems of Kogure’s favourite restaurant; the odd woman who sells tofu rolls in the park, and the antics of two rather bumbling thieves, and you have a faintly surreal film that never shirks from its oddball nature.

Clearly much takes place in Kogure’s imagination (especially the giant person-sized cocoon in his flat) but then the whole film is defiantly strange. The mannered movements of the actors, the clothing and the static camera placements combine to deliver something rather tender and odd. It has moments of almost cartoonish comedy – such as a Three Stooges-like tussle between Kogure and the two thieves – but at its rather tender core is a sense of gentle romance and re-birth.