And Now A Word From Our Sponsor 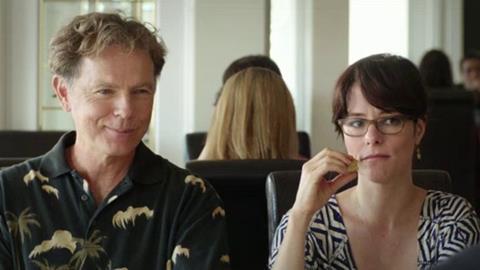 A charming enough comedy-drama that wears its link to the Hal Ashby-directed Peter Sellers classic Being There well and truly on its sleeve, the ungainly titled And Now A Word From Our Sponsor benefits from nice performances by Bruce Greenwood and Parker Posey, but can never quite recover from being a one-concept film that suffers from diminishing returns.

Bruce Greenwood does his best with the character and is never less than engaging.

The Canadian film, which screened at the Newport Beach Film Festival prior to a modest theatrical outing, takes a simple concept from writer/producer Michael Hamilton-Wright – that its enigmatic lead character speaks only in slogans from television commercials – and works it as hard as possible while also trying to deliver the comedy-drama goodies.

The film opens with legendary advertising executive Adan Kundle (Greenwood) collapsing in front of a bank of television screens in an electrical store. When he wakes in hospital he only speaks in advertising catchphrases. Hospital exec Karen (Posey), a self-confessed advertising nut who once attended a lecture Adan gave, spots him there, and volunteers to look after him until a care home space can be found.

At the same time Lucas Foster (Callum Blue), who has been running the Kundle advertising agency since Adan vanished a year earlier, is bemused to hear about his bosses return, and plans to use his odd medical condition as a way of taking over sole control of the company.

Adan finds himself caught into the middle of Foster’s machinations as well as Karen’s tempestuous relationship with her teenage daughter Meghan (Allie MacDonald), offering up advertising-speak one-liners to suit the occasion and gently impacting on their lives.

In Ashby’s 1979 film Being There, Peter Sellers played a simple man who had never left an estate until his guardian died and his views on life were all taken from television, which he watches obsessively when he makes his way into the wide world. The conceit is similar in And Now A Word From Our Sponsor, especially in a scene where Adan comes with a logo for a Senator running for Presidency based on advertising tag line in a way that Sellers’ character Chance advises the President based on a television sound-bite.

It is all pretty predicable stuff, right through to the ‘magical’ ending, and while the impressive Bruce Greenwood does his best with the character and is never less than engaging, the part lacks the complexity and back-story of Sellers’ Chance. Parker Posey is as feisty and engaging as ever, and helps gives the film the energy the rather limp storyline lacks