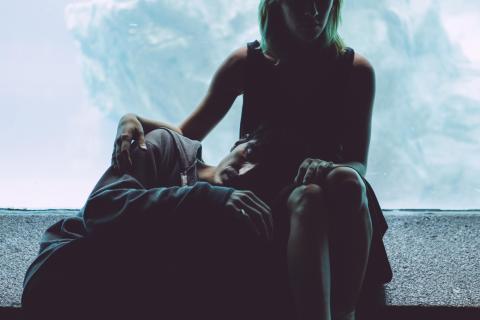 A bleak and often grim story of how two smart young middle-class lovers descend into a world of drug addiction and criminality, Colin Schiffli’s Animals is a smart but tough tale. Sad and grim, it charts a familiar filmic route (such as Candy and Drugstore Cowboy) but smartly keeps the story dour and downbeat, which in truth may not help distribution but should help it secure further festival slots.

The film is darkly and appropriately pragmatic, with their journey into the world of drugs accompanied by overdoes, serious health scare and scrapes.

David Dastmalchian and Kim Shaw are terrific as Jude and Bobbie, an intelligent and attractive pair who now live in their car and have a series of scams to raise the money to score drugs. The include pretending to offer rewards for a laptop; gatecrashing weddings and stealing from emergency rooms. Bobbie more dangerously even pretends to be a prostitute to steal cash and run away.

The film’s flashbacks show a happier time when they lived together and while there is much talk of giving up drugs, but Jude especially is hooked big-time, and is the one who pushes Bobbie to pretend to be a hooker, and even when there is a chance of salvation for her still reels her back into his dark world.

The film is darkly and appropriately pragmatic, with their journey into the world of drugs accompanied by overdoes, serious health scare and scrapes both with dealers and vigilantes who want to stop access to drugs and see users as part of the problem. In one scene Jude is viciously beaten by men who don’t want their kids to go down the same route.

David Dastmalchian is impressive as a the gaunt but clearly intelligent Jude, aware about the damage he is causing to himself and Jude but unable – or unwilling to pull away - while Kim Shaw is equally good as the elfin Bobbie who senses there may be a way back, but finds it hard to pull herself away from Jude. It is a grippingly gritty and bleak film – and all the better for not puling its punches.