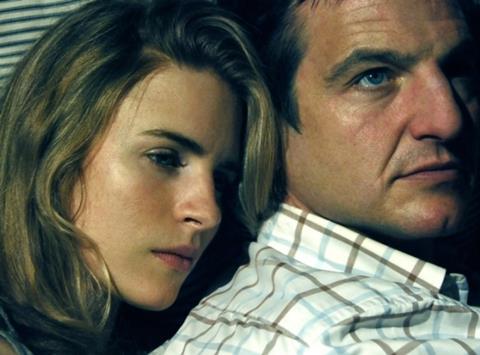 A Sundance prize-winner and bidding war target, atmospheric sci-fi-tinged drama Another Earth has hot talent - buzzed about star and co-writer Brit Marling - and a cool indie feel even if it never quite lives up to the promise of its intriguing setup. The marketing hooks should help distributor Fox Searchlight pull in a sizeable art house crowd but breaking out into the mainstream seems unlikely.

The vibe is enhanced by a nicely stark score.

Searchlight - which bought worldwide rights just before the film won Sundance’s Special Jury and Sloan prizes - has set a July 22 US release, placing Another Earth in the middle of a competitive and sci-fi-heavy summer release schedule. International territories, where audiences may be more receptive to the subdued tone, might offer a better chance of crossover success.

Marling (whose other Sundance entry, Sound of My Voice, was also picked up by Searchlight) plays Rhoda, a bright young woman fascinated by the discovery of a planet whose cities, continents and even inhabitants duplicate those of Earth. After causing a car crash that kills a pregnant mother and child, Rhoda tracks down the grieving father (played by Lost’s William Mapother) and, without revealing her identity, starts trying to make amends.

As the duplicate Earth gets closer to the original planet, making travel from one to the other a possibility, the story’s sci-fi backdrop comes more to the fore, raising questions about parallel universes and giving Rhoda, who enters a contest to win a trip to Earth 2, hope of real redemption.

Probably for financial as much as artistic reasons (the budget was reportedly only $150,000) the film never actually takes us to the mysterious new planet or fully explores how Earth people will react to their doppelgangers. Instead, first time feature director Mike Cahill (who previously made documentary Boxers And Ballerinas with Marling) lets the story unfold in a series of slow, mostly one- or two-character scenes with minimal dialogue. Some of the scenes have a certain charge but the intensity rarely rises enough to fully justify the ponderous pacing.

Cahill, who also acted as cinematographer and film editor, gives the film a shaggy, hand-held look and the vibe is enhanced by a nicely stark score from trendy electro-rock band Fall On Your Sword.