Apes climb to the top in the UK 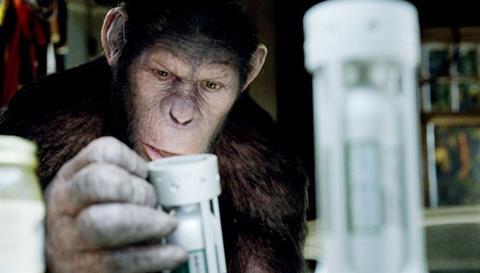 Fox’s Rise Of The Planet Of The Apes debuted in first place in the UK, taking £5.8m (including one preview day) from a week-high 488 screens and a week-high screen average of £11,957. The solid haul was a marginal improvement on Tim Burton’s 2001 remake Planet Of The Apes, which opened on £5.4m and went on to total an impressive £16.9m.

Sony’s family-comedy The Smurfs debuted in second position, grossing a moderate $3.8m (including two preview days) from 447 screens at an £8,452 average.

The Smurfs performance was at least a considerable improvement in the UK for director Raja Gosnell, whose previous effort Beverly Hills Chihuahua managed only a £1m haul from 422 screens on debut in 2008.

Harry Potter And The Deathly Hallows: Part 2 was unable to make it five weeks in a row, slipping to third place after grossing a further $1.7m for £66m. Warner’s blockbuster, still playing on 469 screens, dropped only 38% in its fifth week - the second-smallest decline among the top ten films - and is now firmly lodged in fifth position on the UK all-time chart, one place behind Titanic (£69m), which it is unlikely to overtake.

Fourth-placed Super 8 and fifth-placed Mr Popper’s Penguins saw underwhelming holdovers, grossing £1.2m and £897,336 respectively, while Universal’s surprise smash of the summer Bridesmaids is still playing among the top ten films in its eighth week, grossing a further £332,171 to overtake 2009 film The Hangover on the UK all-time chart.

Icon’s The Devil’s Double disappointed in eleventh, managing only £318,512 from 209 screens at an average of £1,524 and there were similarly lacklustre openings for Reliance’s drama Aarakshan, Trinity’s French romantic comedy Beautiful Lies, Icon’s documentary Project Nim and Revolver’s Elite Squad 2, none of which crossed £80,000 over the weekend.

Critically appreciated Artificial Eye comedy The Salt Of Life at least saw the week’s fourth-best screen average, taking £42,737 from 17 screens at an average of £2,514.

In the final weekend for a summer studio tentpole release, this weekend sees saturation releases for Paramount’s Cowboy’s And Aliens, Fox’s Glee: The 3D Concert Movie, Entertainment’s The Inbetweeners and Spy Kids: All The Time In The World 4D, and limited releases for Axiom’s Oscar winner In A Better World and Optimum’s Irish hit The Guard.