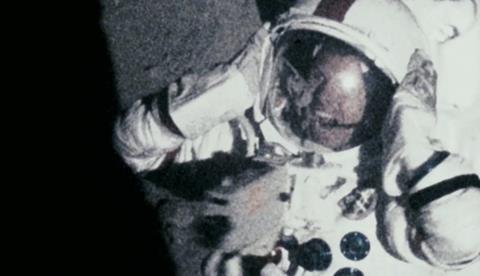 Crudely effective, Apollo 18 delivers almost precisely what its cryptic marketing promises: a found-footage sci-fi horror film in which something very bad will befall our heroes slowly but surely. Audiences going to this deadly-creatures-on-the-moon flick hoping for something in the vein of The Blair Witch Project or Paranormal Activity won’t be disappointed, although director Gonzalo Lopez-Gallego can be faulted for perhaps sticking a little too close to a familiar formula.

Performances in a movie like Apollo 18 are at their best when they’re not noticed, and the three leads are comfortably generic in their square-jawed heroism.

Released domestically today without screening for critics – presumably to build the mystery of what precisely happens in the film – Apollo 18 could be the box office champ in a weak holiday weekend if it can outlast The Help and Shark Night 3D, two very different competitors. With no stars, the movie’s found-footage gimmick is its biggest selling point, but with Contagion coming next week, this modest offering should rather quickly move out of theatres and into ancillaries.

Purported to be culled from recently discovered footage of a covert 1974 NASA mission, Apollo 18 recounts the expedition of astronauts John (Ryan Robbins), Nate (Lloyd Owen) and Ben (Warren Christie) as they travel to the moon to deposit surveillance equipment for the U.S. Department of Defence. Once there, though, they’re surprised to discover an abandoned Russian vessel – as well as signs that there may be something ominous lurking on the lunar surface.

Produced by Timur Bekmambetov (the director of Wanted) and helmed by relative newcomer Gonzalo Lopez-Gallego, Apollo 18 follows the standard trajectory of movies of this kind, first informing the audience in the opening titles that what they’re about to see is recovered footage and then slowly showing the characters realize the horror that’s about to envelop them. But while it’s a well-worn technique, Lopez-Gallego gets sufficient mileage out of it by playing up the setting’s inherent claustrophobia, not to mention manipulating the viewer’s fear of running out of oxygen far away from home. Although it would be a stretch to call the film terrifying, there is a nicely consistent sense of anxious dread that hangs over the proceedings.

Anyone who’s enjoyed Apollo 18’s precursors will know what to expect from the predictable story but, aided by cinematographer Jose David Montero, Lopez-Gallego does a solid job recreating the look of 1970s-style Super-8 footage, which gives the movie a visual novelty.

In the process, Apollo 18 easily sidesteps a logic problem that usually confronts the found-footage genre, which is why the characters would be filming everything in the first place. (In the case of the astronauts, that’s part of their mission.) Granted, the exterior moon shots can sometimes look painfully artificial, but on the whole the details are convincing enough so that it doesn’t take the viewer out of the experience.

Likewise, performances in a movie like Apollo 18 are at their best when they’re not noticed, and the three leads are comfortably generic in their square-jawed heroism. As would be expected, one of them will face life-or-death stakes when he comes into contact with the mysterious moon creatures, which are simply but pungently rendered. But even as the tension escalates, the acting remains understated so as not to distract from the overall grim vibe.

While it may seem to be a minor point, one of Apollo 18’s most aggravating qualities is its cheating of the found-footage gimmick by inserting needlessly discordant editing tricks into the mix. Jump cuts and moody transitions might superficially add to the suspense, but they feel wholly incongruous for what’s supposed to be a factual reconstruction of what happened to these astronauts. If the found-footage genre is meant to derive its horror in part from the seemingly banal situations it documents, Apollo 18 occasionally reveals a lack of confidence by cuing its audience on how to feel at certain moments.