The director talks to Tyler Pukatch about his inspiration for The Iceman, the key to finding the right cast and his fascination with the real-life assassin. 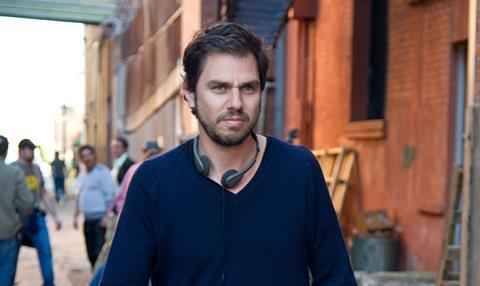 In true story The Iceman, Michael Shannon delivers one of his most chilling performances yet as Richard Kuklinksi, a doting husband and father who, unbeknownst to his family, worked as a prolific contract killer.

Winona Ryder, Chris Evans, James Franco and Ray Liotta also star in the drama, set to open on May 3 through Millennium Entertainment. The Iceman premiered in Venice last year.

Where did you get the original idea for the movie?

Ariel Vromen: I saw the first documentary [on Kuklinski], the first part they showed in the Nineties, and I saw some 19 hours of outtakes. There were so many moments there, where the guy had a sense of humour. There was a beat where he was asking for a cup of coffee and he was so gentle about it. I left the screen and his image, and his ideas, and his struggles stuck with me. I was getting more and more curious about knowing more and reading more and doing research.

Of course you know at one point you kind of like realise that he became The Iceman… but I still think the idea of a killer [who was also] just a normal guy was just something that really struck me. It’s a movie that’s going to take you into a different time period of film-making. It’s going to throw you into movies like Taxi Driver and Serpico. It’s a movie that will take you into a rollercoaster of characters. I hope people will like it.

What influenced you to cast Michael Shannon as the lead?

The first time I saw him was at an after party when he was nominated for Revolutionary Road. I went over there and approached him and we talked about it and he didn’t know anything about the character or the story. His first reaction was, ‘Good luck trying to make a movie with me in the lead.’ And I said, ‘Well, maybe you could play something else.’ I just wanted him to be a part of it.

Then I didn’t hear from him or talk to him [for a while and we eventually reconnected.] I got hold of him and said, ‘How about we shoot a test scene?’ He agreed and the rest is history. I think he appreciated the perseverance I had. I didn’t go and make the movie with anybody else and I kept on trying to hunt him and make it happen with him and he also knew the challenges with that and he was pretty cool about it.

What elements did Shannon bring to the table?

Michael Shannon, although he’s a sweetheart person, he carries that natural darkness and the challenge with him was getting more emotion and sensitivity. For the majority of the film, you’re not going to question whether this guy can do those crimes or not.

The challenge that we had was getting that lack of love and security that he has in him. You can see it in a lot of people who are very rich in our society. And a lot of those billionaires are usually stories of people who come from nowhere. There is some kind of force inside of people that is lacking a certain element of love – that idea of security, of home, of kids, a wife – that entire cloud, that entire bubble of fighting for something that I think he was striving for. Michael and I, when we talked about this [character], we always knew that he took the abuse as a motivator, rather than being fearful.

How did the financing play out?

I know Michael is so strong in his performances, but it was a real challenge to finance the movie. Sometimes you’ve got to fight for your creatives and hope it plays out. We’re living in a kind of talent stock exchange world, where it’s all about who means something, and who [gives value] to something.

One of the things I learned is that, yeah, you have to have a strong script, but sometimes those foreign sales agents really need tools and ranking names is the biggest tool in sales. Buyers over the years have responded to movies with big names and [some of] those movies didn’t perform, so they were seeking more the quality of the product. So, if you’re a film-maker and you have an idea for a film and some kind of a cast, go and show the world what you can do. It’s a great show tool, because at the end of the day, what you see is what you get.

How did the rest of the cast come together?

Each one of them was their own story. Ray [Liotta] came up to me discussing the character and he was very reluctant at first in appearing as a mafia guy, although he hadn’t played one in 22 years since Goodfellas. Although we are all thinking that Ray Liotta is the classic mafia guy, it’s just because it’s in the imprint of our brain. For him, it was still something that he was not sure about, but eventually he went because of creative reasons and, you know, Michael Shannon.

Winona [Ryder] got the script and she was dreaming of working with Michael. Chris Evans and I were friends before, so I approached him on that one. When I told him that we were going to give him long hair and yellow teeth, that’s what sold it out. When you’re playing those big movies all the time and it’s such a big machine, and most of the time you’re standing in front of those giant stages with blue screen and green screen and the performance is very technical, you kind of need to come and get down and dirty, which is something that is attractive to the actor.

With James [Franco], he kind of slipped into the role, because he was supposed to be Mr. Softee [the role played by Evans], but then production got delayed and he had some personal issues at home, his father passed away, so he couldn’t come for the whole shoot. But he came on board because he’s a very good friend of Michael Shannon and Michael did a couple of his short films in university so he was sort of obliged to come and support.

There are a few projects. I’m writing a movie called Narco, that takes place in the world of narco-trafficking submarines. It’s a super crazy world. I spent some time in Colombia with some DEA agents, sub hunters, to look for those subs. It’s becoming a huge threat. The more we’re waiting and everyone is still speculating about it, there’s over 30 or 40 fully submerged submarines that are going back and forth between Colombia, the East Coast, Panama, Costa Rica, maybe even the States, we don’t know yet. I found that there was a story in there to be told.