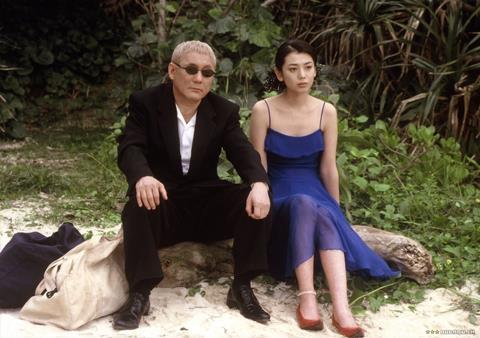 By the morning of thepress screening, pretty much everyone on the Lido knew that the “surprise” filmon the Venice competition roster was the new project by Japanese auteur and TVcelebrity Takeshi Kitano. The real surprise, however, came at the end: thebriefest ripple of applause, punctuated by a few boos, from the normally loyalVenice press corps.

Zatoichi, Kitano’s cool, parodic martial arts epic from 2003,was the first of the actor-director’s films to break out towards a generalaudience (it also, ironically, won four prizes at Venice, including theaudience award and the Special Directors’ Award).

With Takeshis’, a twistedfantasy riff on what it means to be Takeshi Kitano, it’s almost as if thedirector is punishing himself for this previous foray into accessibility andpure entertainment.

Opening as a promising crossbetween Otto e mezzo and the Secret Life Of Walter Mitty, Takeshis’soon spirals into inconsequential whimsy, abandoning dramatic logic for dreamlogic, coasting by on surreal humour, and finally alienating all but the mosthardline Kitano fan.

Though it will have arespectable arthouse opening in most Kitano-literate territories on the back ofZatoichi’s success, Takeshis’ has a short theatrical shelf-life.Only at home in Japan, where the life and antics of Beat Takeshi (the name thedirector uses when performing) are endlessly fascinating, is thisself-indulgent exercise likely to generate anything like the box office enjoyedby Kitano’s previous outing.

Perhaps this is the point ofthe dream sequences that bookend the film, in which a wounded Japanese soldier,played by Kitano, is towered over by a sardonic, hard-jawed American GI with agun: the vulnerable auteur offering himelf up as a sacrificial victim to hisWestern critics.

The meat of the storyconcerns Beat Takeshi, who is played by Kitano as a photo-shopped version ofhimself, his grumpiness and luxury lifestyle enhanced to fit his public andmedia image in Japan.

One day, in the TV studioshe appears to own, Beat comes across his double Mr Kitano, a washed-up actorreduced to playing clowns and doing endless audition for parts he never gets.With his hangdog expression and congenital bad luck (one audition ends when hefails to unbutton the jacket he is supposed to wear for the role), Mr Kitano isan engaging loser straight out of the silent comedy repetoire; and when heaccepts a present from an admirer intended for Beat Takeshi, we half expect anunknown/celebrity rise-and-fall story in the style of All About Eve.

Instead, as so often in thefilm, dream slippage replaces dramatic development. Both Beat Takeshi and MrKitano daydream, Mitty style: Beat imagines his anxious manager as a taxidriver, his TV wardrobe master as a noodle cook; and Mr Kitano elaborates afantasy of revenge based in part on early Kitano yakuza movies like ViolentCop and Boiling Point.

In often garish colour, withCG animation used in recurring tropes such as the caterpillar that creeps outof a bunch of flowers, Takeshis’ bristles with visual inventiveness and surrealgags, but this is not enough to shake off our increasing irritation at theonanistic nature of the exercise, which refuses any form of emotionalengagement.