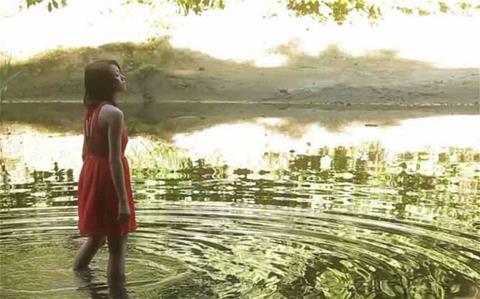 This French title for a gently playful Japanese comedy of tangled love affairs deliberately betrays its references and ambitions, and while slow to set its scene once it finds its pace, Koji Fukada’s film turns out to be a charming and one likely to be embraced on the festival circuit where its Eric Rhomeresque qualities may strike an appreciative chord.

As the title implies (it translates as ‘Goodbye to Summer’) it is a film with a warm and easy afterglow, relying on subtle humour and tentative relationships and never trying to play the traditional rom-com game.

Au Revoir L’etesuffers from being a little too static at times, but writer/director Kudada’s sure touch combined with a strong cast help keep the film charmingly engaging as the characters find themselves increasingly caught up in romantic complications. The humour is gentle rather than laugh-out-loud, but it is punctuated with genuinely charming moments.

Fortysomething Tokyo loner Mikie (Mayu Tsuruta) housesits for her sister back in their hometown, and bumps into former love Ukichi (Kamji Furutachi) who is running a love hotel and trying to support his waspish daughter Tatsuko.

There is clearly something still lingering between Mikie and Ukichi - while at the same time her niece Sakuko (the delightful Fumi Nikaido) takes a shine to his shy part-time helper Takashi (Taiga Nakano) -  but matters of love are never less than complicated….especially when her former lover, art historian Nishida (Tadashi Otake) arrives in town to try and reignite their relationship.

In typically frothy French romantic style these various liaisons and would-be relationships interweave in genial and warm-hearted fashion, all delightfully performed and while the film is rather sluggish to start it finds its feet and a correct sense of pacing as the storylines develop.

As the title implies (it translates as ‘Goodbye to Summer’) it is a film with a warm and easy afterglow, relying on subtle humour and tentative relationships and never trying to play the traditional rom-com game. After Fukada’s last film Hospitalité played on the festival circuit, it would appear this French loving Japanese director is an art-house talent to keep an eye on.