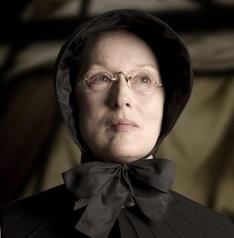 The performance (according to Screen’s review): “Streep’s engrossing performance seems a lock for her 15th Oscar nomination. It begins as an exercise in terseness, all clipped tones and slightly accented scolding. As the movie unfolds, however, there are even a few flashes of humanising humour and Sister Beauvier blossoms into a character every bit as complex as Father Flynn.” (Brent Simon)

The politics: It is all very well being a perennial nominee but perhaps it is time for Streep to win her third Oscar and there is no better vehicle than Doubt. The film offers her meatiest dramatic role in years as the severe nun whose convictions get the better of her common sense. The fact she sang and danced in blockbuster Mamma Mia! The Movie will also contribute to the goodwill.