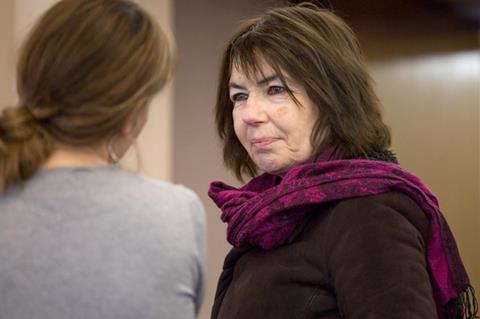 Kim Longinotto has been named the 2015 recipient of the BBC Grierson Trustees’ Award.

The documentary filmmaker is known for titles including Sisters In Law, which won the CICEA award at Cannes in 2005, Pink Saris and latest release Dreamcatcher, which won the Directing Award at Sundance in January.

Announcing the award, a statement from The Grierson Trust described Longinotto as: “the creator of numerous groundbreaking films which focus on and explore the lives of women across the globe,. Throughout her career she has consistently given voice to those who have no voice living in some of the world’s most repressive and hostile societies.

Grierson Trust chairman Lorraine Heggessey said: “Kim is a filmmaker like no other. In a genre still dominated by men, she holds a unique place in that world. Fearless, she travels around the globe to difficult and dangerous places, often putting herself at risk, to bring important and hidden stories to light.”

Kim Longinotto studied camera and directing at England’s National Film School, where she made Pride Of Place, a critical look at her boarding school, and Theatre Girls, documenting a hostel for homeless women.

Her latest film, Dreamcatcher focuses on the work of Brenda Myers-Powell, whose Dreamcatcher Foundation is a Chicago-based charity that helps women get out of prostitution. Released in January 2015, it has made the Grierson 2015 shortlist for Best Documentary on a Contemporary Theme - International.

The winners of Grierson 2015: The 43rd British Documentary Awards will be revealed in London on Nov 2.