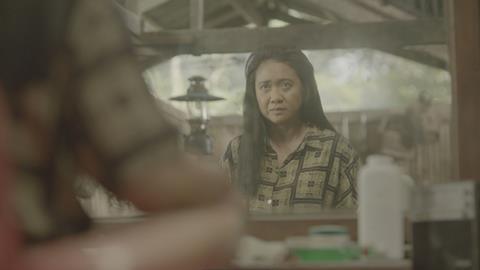 Jun Robles Lana’s engaging and nicely presented Barber’s Tales may be lacking in the sheer resonating drama that defined the filmmaker’s film Bwakaw last year, but it does provide a wonderful platform for the talented Eugene Domingo, who starred in 2011’s impressive award-winning Filipino film The Woman In The Septic Tank.

Eugene Domingo is very much at the heart of the film, those compared to her dynamic and multi-layered role in The Woman In The Septic Tank the part of Marilou is much more straightforward and one-note.

Set against the backdrop of the amid the political turmoil of Ferdinand Marcos’ second presidential term, the rural-set drama skirts around melodramatic territory but has enough drama, laughs and mood to appeal, and even has a heart-warming ‘I am Spartacus’ moment in one of the final scenes. The film screened in competition at the Tokyo International Film Festival.

Based on a story by Peter Ong Lim, Elmer L. Gatchalian, Benedict Mique and Jun Robles Lana the film follows Marilou (Domingo), the loyal wife of village barber Jose (Daniel Fernando) who treats his wife as a virtual slave while he heads off to the local brothel.

Out of the blue he dies in his sleep and with the encouragement of the genial local priest (Eddie Garcia, who stared in Bwakaw)  she continues to run the barber’s shop using the skills her husband had taught her, though he only did so, so that he would cut his own hair.

The local men initially distrust her, but with the support of the women - and the fact that the area’s mayor (Noni Buencamino) casks her to cut his hair – things start to look positive. She is also befriended by the mayor’s beautiful but sad wife Cecilia (Iza Calzado), but just as things seem to be going well her life takes another hit.

Not only does Cecilia become increasingly unstable, but Marilou’s godson Edmond (Nicco Manalo) starts to become involved the with rebels and asks her to shelter an injured colleague. Forced to take sides she eventually has to go into hiding and cut her own hair (leading to the ‘I am Spartacus’ moment of support from other women of the community) before the film heads into an entirely predictable and straightforward ending.

Eugene Domingo is very much at the heart of the film, those compared to her dynamic and multi-layered role in The Woman In The Septic Tank the part of Marilou is much more straightforward and one-note. She gives the film all she can, but her character barely develops and rarely breaks out of her monotone persona.