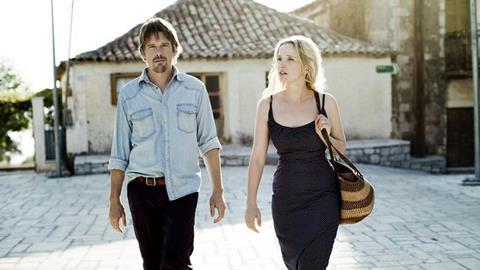 It’s a question as important to lovers as it is to filmmakers working on a sequel to a beloved franchise: How do you keep the spark alive? With Before Midnight, the third instalment in the series that began with 1995’s Before Sunrise, the answer is the same in both cases: by honouring what made it so special in the first place, no matter the passing of time and the obstacles along the path.

Before Midnight, by design, is a more difficult and nuanced exercise, showing how ardour can last despite the pain and disappointment that has built up. Perhaps that’s why it’s so gratifying that this is also easily the funniest film in the series.

This very honest and very funny film may lack the exuberant romantic spirit of the first two movies, but for director Richard Linklater and his stars Ethan Hawke and Julie Delpy, that’s precisely the point. Before Midnight argues that romance is easy — deep, committed love is a far more treacherous, but also more rewarding, pursuit. By seeing that reality clearly, they’ve made a complicated, meandering but also wonderful film.

Premiering at Sundance, which also played host to Before Sunrise, Before Midnight will be welcomed warmly by audiences that have seen Before Sunrise and 2004’s Before Sunset and want to know what’s happened to Jesse (Hawke) and Celine (Delpy) since the last film. It will be difficult for those unfamiliar with the first two films to leap directly into Before Midnight, but expected strong reviews will help build awareness for one of the festival’s most-anticipated titles.

The filmmakers had been tight-lipped about Before Midnight’s plot line, which helps make the movie’s early reveal so surprising: Nine years after Before Sunset, Celine and Jesse are now a happy (but unmarried) couple living in Paris with their twin girls. Wrapping up a six-week holiday in Greece, Celine and Jesse spend the day and evening talking honestly about their lives and their relationship, bringing to light difficult questions about their future.

The Before series remains an astonishing thing: a modest indie franchise that tracks its lovers’ progress every nine years over the course of no more than 24 hours. It’s a structure that continues to reap huge benefits, even though the new film plays with the formula some by changing Celine and Jesse’s relationship status and bringing peripheral characters into the mix for once. (Celine and Jesse spend a little time chatting with friends about the differences between men and women, questions of identity, and the challenges in making love last. It’s interesting, sometimes longwinded talk, but it’s merely a prelude to the heartfelt conversations that Celine and Jesse will soon engage in.)

As with Before Sunset, Before Midnight was written by Linklater with his two stars, and the new film wizardly concocts several lengthy single-take scenes in which the couple talk quite casually about matters both big and small. As they grow older, Hawke and Delpy even more convincingly suggest their characters’ long-time bond, the intriguing wrinkle in Before Midnight being that, while love remains, the accumulated years of domesticity, compromise and parental responsibilities have drained some of the light from their eyes. The complexity of relationships is felt potently, and indeed all the resentment, shared language, small truces and incisive insults that can be part of any romantic commitment are on display through the utterly natural performances.

If the first two films were about trying to capture the ineffable euphoria of new love, then Before Midnight, by design, is a more difficult and nuanced exercise, showing how ardour can last despite the pain and disappointment that has built up. Perhaps that’s why it’s so gratifying that this is also easily the funniest film in the series. Linklater and his stars have sobering things to say about mortality and regret, but the fact that they find so much spiked humour in the material speaks volumes about the very optimistic heart still beating at the core of this franchise. Love isn’t easy, and neither is moviemaking. With Before Midnight, Linklater, Hawke and Delpy’s on-going affair grows all the more poignant and inspiring precisely because of how hard it is.