Other titles include Rebecca Miller’s Maggie’s Plan, starring Greta Gerwig, and David Farr’s The Ones Below, starring David Morrissey. 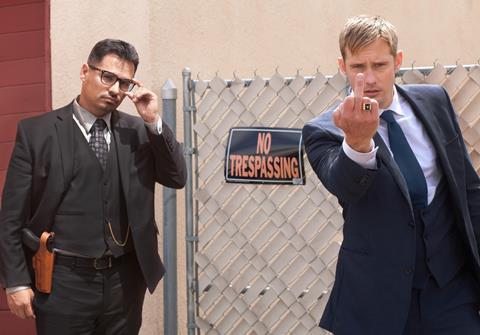 Scroll down for full lists

The Berlin International Film Festival (Feb 11-21) has announced the first titles in Panorama – its strand that comprises new independent and arthouse films that deal with controversial subjects or unconventional aesthetic styles.

The initial features include three from the UK, with John Michael McDonagh returning to Berlin for the world premiere of War On Everyone.

McDonagh was previously in Panorama in 2011 with The Guard and 2013 with Calvary.

Also from the UK is David Farr’s The Ones Below, which revolves around a couple expecting their first child who discover an unnerving difference between themselves and the couple living in the flat below. Receiving its European premiere in Berlin, it stars Clémence Poésy, David Morrissey, Stephen Campbell Moore and Laura Birn.

The final UK title is Omer Fast’s Remainder, which will receive its international premiere and has a cast that includes Screen Stars of Tomorrow Tom Sturridge and Cush Jumbo as well as Ed Speleers, Arsher Ali and Shaun Prendergast.

Based on Tom McCarthy’s novel, the story centres on a man who loses his memory when he’s struck by a falling object and develops a way to reconstruct his past.

Other selected titles include Maggie’s Plan, a US feature directed by Rebecca Miller (The Ballad of Jack and Rose) and starring Greta Gerwig, Ethan Hawke, Julianne Moore, Bill Hader and Maya Rudolph.

Frances Ha star Gerwig plays Maggie, whose plan to have a baby on her own is derailed when she falls in love with a married man. It will receive its European premiere in Berlin, after debuting at Toronto in September.

French directors Olivier Ducastel and Jacques Martineau will return to Berlin having won the Europa Cinemas prize in 2005 with Cockles & Muscles, the Teddy award in 2000 with The Adventures of Felix and played in Competition in 1998 with The Perfect Guy.

The duo return with the world premiere of Paris 05:59 (Théo et Hugo dans le même bateau), a relationship drama starring Geoffrey Couët and François Nambot that unfolds over a night in Paris.

The Panorama strand will also include the first fiction feature from Ghana to be selected for the Berlinale. Nakom, from directors Kelly Daniela Norris and TW Pittman, centres on a young medical student who has to return to his village after his father dies and get the family farm back on track.

By mid-January, 32 features and 18 documentaries will have been selected for the strand.

The 2016 Berlinale will also mark the 30th anniversary of the Teddy Award, an offshoot of the Panorama strand that rewards LGBTIQ films.

This year’s anniversary programme will present 16 films, including “rarely seen works”, some of which had been made before the award came into existence in 1987.

As part of this, the Panorama will include a special screening of Different From The Others (Anders als die Andern), a German film from 1919 that is considered the first gay film in cinema. Directed by Richard Oswald, the screening will mark the world premiere of its restoration, carried out by the Outfest Legacy Project and UCLA Film & Television Archive in Los Angeles.

On the Other Side (S one strane) (Cro-Serb) WP
Dir: Zrinko Ogresta

The Ones Below (UK) EP
Dir: David Farr