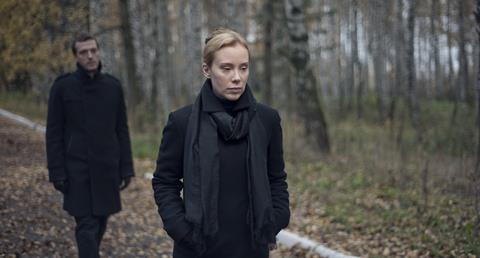 A tense, original study of marital infidelity, Betrayal (Izmena) represents a cinematic coming of age for Russian director Serebrennikov, who has shaken off the stage direction background that showed through in his first film to score some international festival action, Playing the Victim, to create an impressive, arresting metaphysical noir.

Some of Betrayal’s hold on its audience is down to the surprises the script keeps in store, surprises that sometimes risk tipping over into artsy pretension.

Lighting up the early stages of the 2012 Venice film festival competition, Betrayal features a standout performance by German actress Franziska Petri as a cheated and eventually cheating wife whose surface poise is riven by forces of passion she can barely control.

Easily the director’s most saleable film to date, Betrayal is an arthouse number with genre genes that should see it notching up more than a few sales. Eminently cinematic, it should nevertheless work also on a smaller screen for patient, cine-literate audiences.

Think Double Indemnity set in a cold northern dreamscape with only scraps of plot to keep us going and no names to cling onto (in the pressbook, the two main characters are referred to simply as ‘She’ and ‘He’) and you get some idea of the feel of the film. One of its most impressive aspects is the way it refreshes hackneyed film conventions.

The inciting incident is beautifully managed, and completely unexpected: it comes when She (Petri) – a glacially beautiful cardiologist  – informs He (Macedonian actor Dejan Lilic) – a patient who has come in for a routine check-up – that she is not feeling great to day, because her husband is having an affair – with his wife. Later, a transition between acts is effected when She runs into the woods, finds a buried bag of clothes, and changes into them. She’s wearing these same clothes in the next scene – but we soon realise it’s set several years later.

It’s not only names that are erased in the film’s eerily internalised world. Apart from the language the characters are speaking, there are few definite signs that the film is set in today’s Russia; indeed, it seems to stray across the Baltic at times into Nordic territory in its settings, influences and atmospheres. Reticence marks the plot, too, but as She and He come closer, tracking their spouses to the hotel where they always meet for sex and the room they always take, we’re kept guessing, and while the pace is slow the tension never lets up.

Some of Betrayal’s hold on its audience is down to the surprises the script keeps in store, surprises (as in a key scene featuring a steely female detective) that sometimes risk tipping over into artsy pretension. But there’s enough serious probing of the human condition here, and what it means to love another person, to keep the film on an even keel. Some more is down to Petri’s raw take as a woman so brittle we keep expecting her to shatter when touched (in one scene she almost does) – though Lilic’s turn as an ordinary guy whose certainties are toppled is important too: he’s the audience’s main reality touchstone in the film’s increasingly strange world.

But much of the film’s authority also derives from the director, cinematographer and production designer’s impressive control of light, colour, frame and mood. In a pale world, strong colours become warning signs: her auburn hair, or a red scarf that acts a wordless conveyor of the information that a husband knows about his wife’s infidelity. Reflections too are important in evoking the film’s metaphysical (and at times even supernatural) subtext. And although most of the film is not set to music, two brief bursts of Rachmaninoff’s symphonic poem Isle of the Dead startle us with their intrusion, and serve to chart the distance between the film’s mysterious dance and the melodrama it might have been.