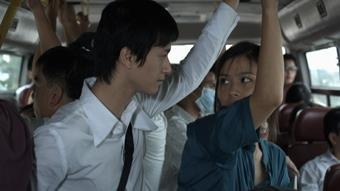 Grounded in the authentic bustle of Hanoi and the uncomfortable interplay of familial relationships Bi, don’t be afraid! is a thoughtful cinematic exploration of inchoate longing, the messy consequences of physical decline and encroaching death, and confirmation that sex and youthful exuberance spring eternal. Frankly and overtly sensual with scant dialogue, this contemporary portrait of relatives living in close quarters while harbouring secrets is conveyed with impressive visual assurance.

A heat-soaked panorama of human desires that is probably more festival fare than art house material in most territories.

Writer-director Phan Dang Di’s leisurely debut feature, which was part of the Cinefondation’s Atelier line-up in 2008, is a heat-soaked panorama of human desires that is probably more festival fare than art house material in most territories, but bodes very well for the directing future of Phan Dang Di who wrote the screenplay for Bui Thac Chuyen’s 2009 Venice Horizons and Toronto competition title Adrift (Choi Voi).

Bi’s seriously ill paternal grandfather has recently returned from years abroad and uses ice to dull the painful cramps in his belly.

Bi’s father’s coping mechanism consists of getting sloppy drunk with cronies every night in a large outdoor café.  Bi, his father and grandfather, while each distinct characters, seem to suggest three major phases in every man’s life. Bi forms a bond with his ailing granddad.

Bi’s mother is frustrated by her husband’s filial cowardice and unwillingness to have sex… at least with her. The family’s cook is a not-always-silent witness to the proceedings.

Bi’s spinster aunt looks after him more attentively than the rest of the household. When do-gooders fix her up with a man they think might be a suitable mate, she struggles to take his advances in stride. But it’s a much younger man she encounters by chance who will rock her to the core.

Various couplings boast convincing raw energy. While there’s not a lot of humour, a scene in which two characters inhale helium from balloons and carry on a high-pitched conversation is as funny as it is incongruous.