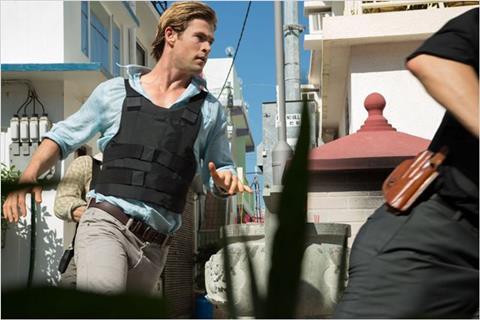 A sensuous, ravishing collection of images that occasionally give way to murky plotting and dull characters, Blackhat is a minor (but palpably hypnotic) film from a major American action auteur. In his first feature since 2009’s Public Enemies, director Michael Mann turns a pedestrian cybercrime thriller into another of his utterly bravura experiences, moving his story around from America to China to Indonesia as coolly as he shifts his characters through space and within the frame. Though starring Chris Hemsworth, Blackhat is undoubtedly Mann’s show, the film’s operatic grandeur and stunning action set pieces best appreciated as expressions of pure cinema, leading one to suspect that the director decided to ignore the story’s many shortcomings and just focus on what he’s good at.

The film is a series of taut, visually inspired sequences that confidently push the story forward at every turn

Opening January 16 in the States, Blackhat comes a week after Taken 3, but unlike that Liam Neeson sequel, this Universal release doesn’t have any built-in audience familiarity to help it during a traditionally slower time at the box office. Hemsworth’s marquee value could help a little, but outside of his roles in Snow White And The Huntsman and the Thor films, he hasn’t proved to be a significant commercial draw. Moody and distinct, without offering a lot of traditional genre pleasures, Blackhat may simply be too esoteric for most ticket buyers, dooming it to limited returns, although cineastes loyal to Mann may well sing its praises.

As the film opens, a nuclear power plant in Hong Kong suffers an explosion, the cause traced to a hack of unknown origin. Because a similar hack occurs at the Chicago Mercantile Exchange, the two countries’ intelligence operations decide to work together, in the form of FBI Special Agent Carol Barrett (Viola Davis) and Chinese Captain Chen Dawai (Wang Leehom). But to hunt down these mysterious cybercriminals, Dawai argues that the Americans need to release from prison Nick Hathaway (Hemsworth), Dawai’s old college roommate and a convicted master hacker.

Blackhat, written by Morgan Davis Foehl, initially tries to hook the audience with the virus-like terror of cybercrime, in which villains anywhere in the world can, with the click of a button, do lethal damage to unsuspecting targets, erasing bank accounts, stealing identities or compromising critical security systems. But Mann, the man behind Heat and Collateral, seems less interested in the material’s political content than he is primed to exploit its setups for propulsive action filmmaking.

Burdened by two significant problems — the mystery isn’t particularly riveting and, because it involves cybercrime, requires a lot of potentially drab scenes of characters staring at screens or typing on keyboards — Blackhat is a formidable challenge even for a director as kinetic as Mann. That’s why it’s so impressive what he delivers: The film is a series of taut, visually inspired sequences that confidently push the story forward at every turn. Even when what’s happening isn’t particularly engaging, Mann’s command of pacing and marriage of image and sound are extraordinary. Blackhat pulls off the rare feet of seeming more compelling than it actually is, Stuart Dryburgh’s crackling, intimate camerawork lending the proceedings the air of an evocative international thriller.

We’re lucky the film is so immersive considering how uninteresting the characters are. In Mann’s weaker films tone and feel become more important than flesh and blood, the director compensating for underwritten roles through polished, chiselled filmmaking that elevates his ciphers into mythic figures. With Blackhat, that problem is even more apparent, as we watch good actors play intentionally stoic individuals to middling effect. Hemsworth attempts to portray Hathaway’s antiauthority streak and unflappable confidence, but what you tend to remember about the character are his pecs and his flowing blond hair. (He’s Thor without the sense of humour or large hammer.) Plus, despite being advertised as a computer genius, Hathaway doesn’t actually do all that much brilliant high-tech work: Conveniently for Mann, he turns out instead to be great with a gun and kicking random baddies’ asses.

As for Davis, she does all she can with a no-nonsense FBI agent who trusts Hathaway about as far as she can throw him. But at least Davis’s quiet dignity sustains her character: Much more unfortunate is Tang Wei as Chen Lien, Dawai’s kid sister who begins an ill-advised relationship with Hathaway during this global hunt for the cybercriminals. Mann invests much into Hathaway and Lien’s burgeoning love affair, but it tends to be no more dramatic or memorable than a perfume ad — although it’s shot just as prettily.

Still, despite Blackhat’s clear, significant flaws, Mann knows his strengths so well that he can transcend the script’s deficiencies to get to the themes that engage him. And from Heat to The Insider to Public Enemies, that’s been a fascination with how men operate in the world — and how they go about doing their work. Blackhat doesn’t have the existential underpinnings that ennobled films as diverse as Ali and Collateral, but for as surface-y as his new movie is, it’s altogether arresting, his sleek, muscular style practically a political statement in its own right. (No one stages gunfights as magnificently as he does — nor does anyone make cars or planes gliding across the screen seem as sexy and dangerous.)

To be sure, the movie will probably appeal mostly to people who already savour Mann’s precise, controlled, grandiose filmmaking temperament. (Action sequences aren’t just life-and-death affairs in Blackhat: They have an almost allegorical resonance, Mann mixing in slow motion and different types of music, sometimes techno or orchestral, to suggest the gravity of the situation.) Reliant on cyber-tech talk and hazy character motivations, Blackhat’s screenplay is merely an excuse for the maestro to use all the instruments in his symphony. In some ways, Blackhat is more an indicator of Mann’s prowess than his many better films are. With those movies, he’s working with stronger, smarter, more original material. But here, he’s messing around with throwaway genre fodder — and look what he does with it.