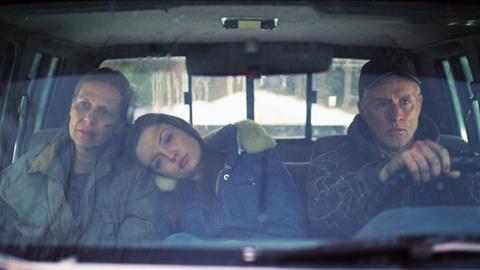 A gloomy and self-consciously bleak and cold drama, Bluebird is driven by a series of strong performances that give the modest and inhospitable drama it might otherwise lack. It is a film of depression and unhappiness, and while perfect for the festival circuit its theatrical life will be limited.

The performances are all spot on and cinematographer Jody Lee Lipes does a terrific job sustaining the look of the snowy and bleak Maine locations.

The film, which screened at the Tribeca Film Festival, also screened in competition at the Karlovy Vary Film Festival. Written and directed by Lance Edmands the chilly drama follows then fractured relationships between a series of people who have to try and deal with a terrible incident.

When Lesley (Amy Morton), a local school bus driver, becomes distracted by a bluebird in her bus when she is completing her end-of-day inspection, she fails to see a boy sleeping at the back of the bus. When he is finally found in a coma the incident shakes the chilly tranquility of her small Maine logging town.

She withdraws, stricken by the sense of grief, while her family relationships are further strained by her taciturn logger husband (John Slattery, from Mad Men), preoccupied by issues at work and the memory of an affair, and her teenage daughter who is starting a tentative affair with a fellow student.

At the same time, the boy’s disaffected mother Marla (Louisa Krause) looks to take advantage of the situation. These fractured and rather cold people struggle to find ways to express real emotion, but are drawn together in the face of a chilling incident.

The performances are all spot on and cinematographer Jody Lee Lipes does a terrific job sustaining the look of the snowy and bleak Maine locations, but the story – gently sustained as it is – can’t really sustain the rather familiar and low-key drama.