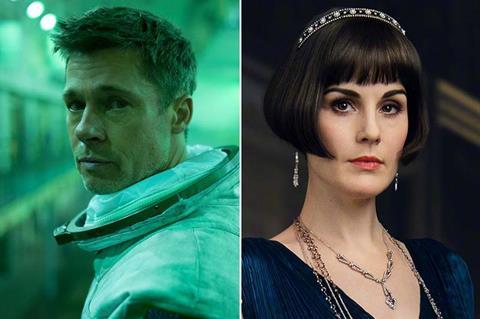 UPDATED: New Regency and 20th Century Fox’s sci-fi Ad Astra grossed an estimated $45.1m globally this weekend and ruled international as well on a confirmed $25.9m from its first bucket of markets. The UK led the way on $2.8m to rank second behind number one hold Downton Abbey, while South Korea produced $2.7m in a debut that was 10% ahead of that of Arrival.

James Gray’s adventure starring Brad Pitt as an astronaut with father issues opened at number one on $2.6m in France, where director and star are highly popular. It scored a $2.3m number one bow ahead of Downton Abbey in Spain, touching down ahead of the debut Gravity and more than double those of Arrival and First Man.

UPDATED: It: Chapter Two generated $21.3m from 78 markets as the international running total vaulted to $206.1m and the worldwide tally reached $385m.

UPDATED: Quentin Tarantino’s Once Upon A Time… In Hollywood used $9.8m from 59 markets to cross $200m and sits on $204.8m internationally, and $344.6m worldwide. Helping Tarantino, Brad Pitt and Leonardo DiCaprio on their way was a $6.1m number one bow in Italy (including previews) that set a new benchmark for the filmmaker in a territory that has rewarded his films handsomely over the years. It opens in South Korea this week.

The Angry Birds Movie 2 earned $5m from 58 markets and stands at $78.3m with the next debuts set for Brazil in October 3, and France on October 16.