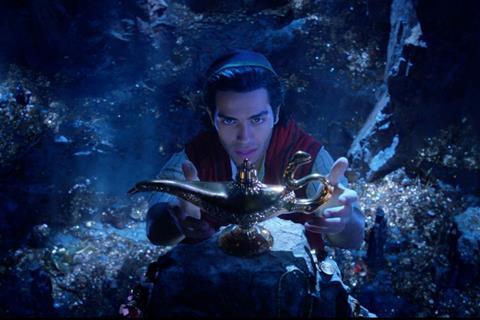 JUNE 3 UPDATE: Disney’s magic carpet ride continued to soar in 2019 as the studio reported it crossed $5bn at the global box office, laying the foundations for an unprecedented $10bn target by the end of the year.

Meanwhile Godzilla II: King Of The Monsters roared in China and Japan as it arrived with a $179m global bow, ruling global and international weekend box office.

UPDATED: With less than half the year gone, Aladdin still in the early stages, and a runway packed with tentpoles for the rest of the year, the studio is on track for a record annual haul. Still to come for Disney are Toy Story 4 on June 21, The Lion King on July 19, Frozen 2 on November 22, Maleficent: Mistress Of Evil on October 18, and trilogy finale Star Wars: The Rise Of Skywalker on December 20, which is sure to generate high numbers in the final 10 days of the year. Fox’s Dark Phoenix opens this week and its gross will contribute to that final Disney tally.

UPDATED: Godzilla II: King Of The Monsters went on a modest rampage across most of the world as it delivered an estimated $178m worldwide, scoring $70.5m in the highest individual market of China, and arriving in Japan on $8.4m. The 2014 Godzilla finished on $328.4m internationally, and $529.1m worldwide.

International markets generated $130m mostly through Warner Bros. In China, Legendary East distributes the monster mash-up and it delivered an estimated RMB 487m to track on par with Kong: Skull Island and overtake other comps such as Godzilla by 116%, The Meg by 40%, San Andreas by 52%, and Rampage by 39%. Toho released Godzilla II in Japan, where ¥918.9m beat all of the aforementioned comps. Across the Asia region, it opened number one in seven markets and beat opening weekend comps San Andreas and The Meg.

This week brings debuts in South Korea and Russia, where local distributor Central Partnership drew the ire of John and a statement in defence of the film’s vision from Paramount after it reportedly cut scenes depicting gay sex and drug use to comply with Russian guidelines.

UPDATED: Illumination Entertainment’s The Secret Life Of Pets 2 brought in $17.2m from nine territories to raise the early tally including $14.8m after two sessions in the UK to $28.4m, with North America to come this week.

The sequel to the $875m 2016 global hit opened top in Russia on $11.2m after five days of previews, and scored the second biggest debut for a Universal animation in Ukraine on $1.3m. The film generated $3.6m in its second weekend in the UK, where it ranks second. The Secret life Of Pets 2 opens in Italy this week.

The Keanu Reeves action thriller with Halle Berry, Ian McShane and Laurence Fishburne arrived in Spain in second place on $763,000, and opens in the Middle East this week. The UK and Australia remain the top two markets after three weekends on $10.4m and $7.6m, respectively.