'Avengers: Endgame' could earn $2.8bn by end of run 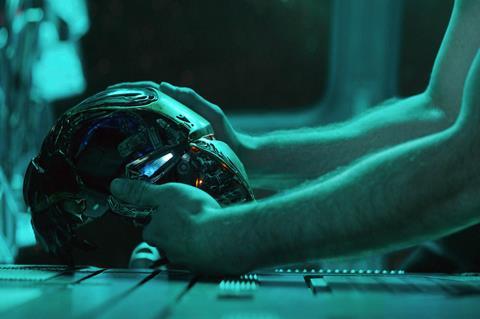 Box office titan Avengers: Endgame will blow away the competition in its second weekend en route to approximately $2bn worldwide, possibly rising to more than $2.8bn in its final global tally by mid-summer to rank as the second highest release of all time in real terms.

By Tuesday Endgame had reached $1.343bn globally, $948.7m internationally including China on $349.1m, and $393.9m in North America. After only six days it already ranked as the tenth highest global release of all time on Monday, and on Tuesday it vaulted to number nine and possibly even eight, although that had not been confirmed by Disney sources at time of writing.

And there is much more to come for Endgame, according to calculations by Randy Greenberg, a Los Angeles-based former studio head of international and now an executive producer. If the tentpole stays in theatres through the end of June and box office drops off by a conservative 50% each weekend, the 22nd Marvel Studios release could end on approximately $850m in North America, $725m China, and $1.3bn internationally excluding China. Including China, international would settle on $2.025bn.

That results in a global haul of more than $2.8bn – a number of course that could go up or down depending on those weekend percentage drops, and how long Endgame remains in theatres. And while that final global gross forecast puts Endgame ahead of Avatar’s nominal final gross of $2.787bn achieved back in mid 2010, when the latter number is adjusted for inflation Avatar is confirmed as the highest grossing global release of all time in real terms on $3.25bn.

The final North American tally would rank second on the all-time roster behind Star Wars: The Force Awakens, which finished on an unadjusted $936.7m by late May 2016.

Endgame’s final overall international tally of $2.025bn would rank number two on the leaderboard behind Avatar on $2.027bn. It is worth noting that when adjusted for inflation, the international Avatar gross rises to roughly $2.36bn. The final China tally of $725m would be the biggest Hollywood release ever in the territory, and the second highest of all time behind Wolf Warrior 2.

However, Greenberg predicted the box office fireworks will have deep ramifications for Hollywood.

“This raises the bar again. The down market effect will be an over-reliance on branded material, which is what all the production executives will be looking for because what everyone will want is that $1bn worldwide opening weekend,” he said. “$600-700m will no longer be big enough.

“The studios will be looking to the international departments to coordinate their international debuts even more than they already do so the global effect can achieve these results.”